The transfusion of T cells, also called adoptive T cell therapy, is an effective treatment for viral infections and has induced regression of cancer in early-stage clinical trials. However, recent advances in cellular immunology and tumor biology are guiding new approaches to adoptive T cell therapy. For example, use of engineered T cells is being tested as a strategy to improve the functions of effector and memory T cells, and manipulation of the host to overcome immunotoxic effects in the tumor microenvironment has led to promising results in early-stage clinical trials. Challenges that face the field and must be addressed before adoptive T cell therapy can be translated into routine clinical practice are discussed. 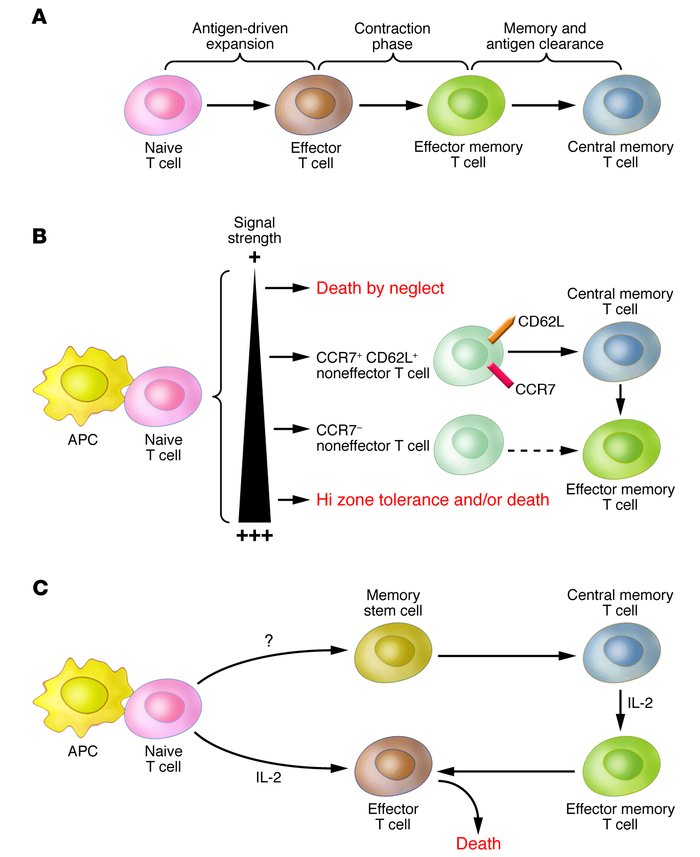 () In the linear differentiation model, an autonomous antigen-triggered differentiation process consisting of conversion from naive to effector to TEM cell occurs, followed by the appearance of TCM cells after antigen clearance through a process of dedifferentiation (). () The signal strength model proposes that naive T cells progress through hierarchical thresholds for proliferation and differentiation as the strength and duration of the interaction with APCs is increased (28, 30). T cells receiving the weakest signals do not survive, whereas high-intensity signaling causes the development of terminally differentiated effector T cells that cannot survive into the memory phase. The TCM cells, being the least differentiated of the antigen-stimulated T cells, retain the developmental options of naive T cells, including their capacity for marked clonal expansion. () The memory stem cell model proposes that the cells within the TCM cell compartment are self renewing and serve as a source of effector T cells (, ).