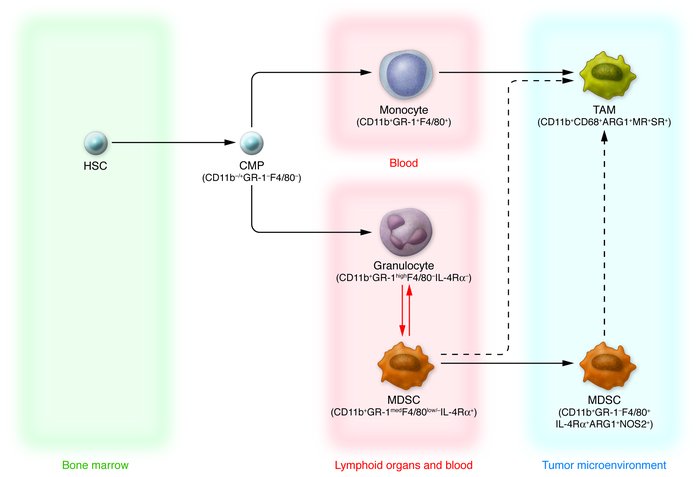 HSCs give rise to common myeloid precursors (CMPs), which subsequently originate at least three subsets of cells circulating in tumor-bearing hosts that can be identified by specific markers: monocytes (CD11b+Gr-1+F4/80+), granulocytes (CD11b+Gr-1highF4/80–IL-4Rα–), and MDSCs (CD11b+Gr-1medF4/80low/–IL-4Rα+). Circulating monocytes are recruited by tumors and differentiate into TAMs, acquiring protumoral functions. During tumor progression, MDSCs accumulating in blood and in lymphoid organs such as the spleen may also be recruited to the tumor microenvironment, where they become F4/80+. This latter pathway of MDSC-TAM phenotype transition (dashed arrow) was recently proposed (, ). Finally, it has been hypothesized that immature forms of granulocytes might differentiate into MDSCs or condition their function and/or further differentiation (red arrows), as suggested by some studies ().