Familial tumoral calcinosis is characterized by ectopic calcifications and hyperphosphatemia due to inactivating mutations in FGF23 or UDP-N-acetyl-α-D-galactosamine:polypeptide N-acetylgalactosaminyltransferase 3 (GALNT3). Herein we report a homozygous missense mutation (H193R) in the KLOTHO (KL) gene of a 13-year-old girl who presented with severe tumoral calcinosis with dural and carotid artery calcifications. This patient exhibited defects in mineral ion homeostasis with marked hyperphosphatemia and hypercalcemia as well as elevated serum levels of parathyroid hormone and FGF23. Mapping of H193R mutation onto the crystal structure of myrosinase, a plant homolog of KL, revealed that this histidine residue was at the base of the deep catalytic cleft and mutation of this histidine to arginine should destabilize the putative glycosidase domain (KL1) of KL, thereby attenuating production of membrane-bound and secreted KL. Indeed, compared with wild-type KL, expression and secretion of H193R KL were markedly reduced in vitro, resulting in diminished ability of FGF23 to signal via its cognate FGF receptors. Taken together, our findings provide what we believe to be the first evidence that loss-of-function mutations in human KL impair FGF23 bioactivity, underscoring the essential role of KL in FGF23-mediated phosphate and vitamin D homeostasis in humans.

Mutational and structural analyses of the H193R mutation. 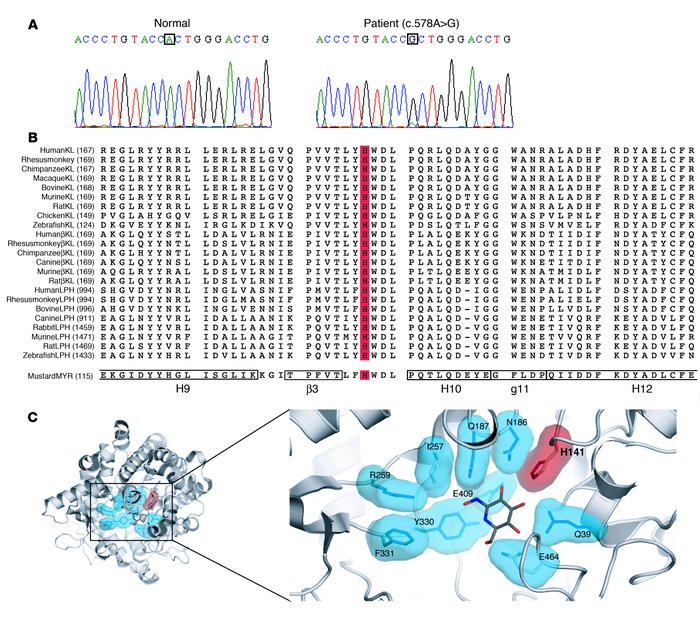 () Mutational analysis of the gene. DNA sequencing of the exons revealed an A-to-G transition in exon 1 (boxes). Left, normal control; right, patient. c.578A>G, homozygous A-to-G transition. () Sequence alignment of the region encompassing the mutated histidine residue of KL and related family-1 glycosidases. LPH, lactase phlorizinhydrolase; MYR, myrosinase. Residue numbers are in parentheses to the left of the alignment. For myrosinase, secondary structure elements are denoted below the sequence, and the locations and lengths of the secondary structure elements are indicated by boxes in the sequence. H, α helix; β, β strand; g, g helix. A dash in the sequence represents a gap introduced to optimize the alignment. The histidine residue, which is mutated in KL of the patient presented in this study, is colored red. Note that this residue is conserved among family-1 glycosidases and their orthologs. () Ribbon representation of the crystal structure of myrosinase (Protein Data Bank [PDB] ID, 1E6S) and surface representation of catalytic site residues. White mustard myrosinase is a plant homolog of human KL. A close-up view of the catalytic cavity with bound substrate (gluco-hydroximolactam) is shown on the right, and to orient the reader, a view of the whole structure is shown on the left. Note that histidine 141 of the catalytic site is homologous to H193 of human KL.