Despite progress in cardiovascular research, a cure for peripheral vascular disease has not been found. We compared the vascularization and tissue regeneration potential of murine and human undifferentiated multipotent adult progenitor cells (mMAPC-U and hMAPC-U), murine MAPC-derived vascular progenitors (mMAPC-VP), and unselected murine BM cells (mBMCs) in mice with moderate limb ischemia, reminiscent of intermittent claudication in human patients. mMAPC-U durably restored blood flow and muscle function and stimulated muscle regeneration, by direct and trophic contribution to vascular and skeletal muscle growth. This was in contrast to mBMCs and mMAPC-VP, which did not affect muscle regeneration and provided only limited and transient improvement. Moreover, mBMCs participated in a sustained inflammatory response in the lower limb, associated with progressive deterioration in muscle function. Importantly, mMAPC-U and hMAPC-U also remedied vascular and muscular deficiency in severe limb ischemia, representative of critical limb ischemia in humans. Thus, unlike BMCs or vascular-committed progenitors, undifferentiated multipotent adult progenitor cells offer the potential to durably repair ischemic damage in peripheral vascular disease patients. 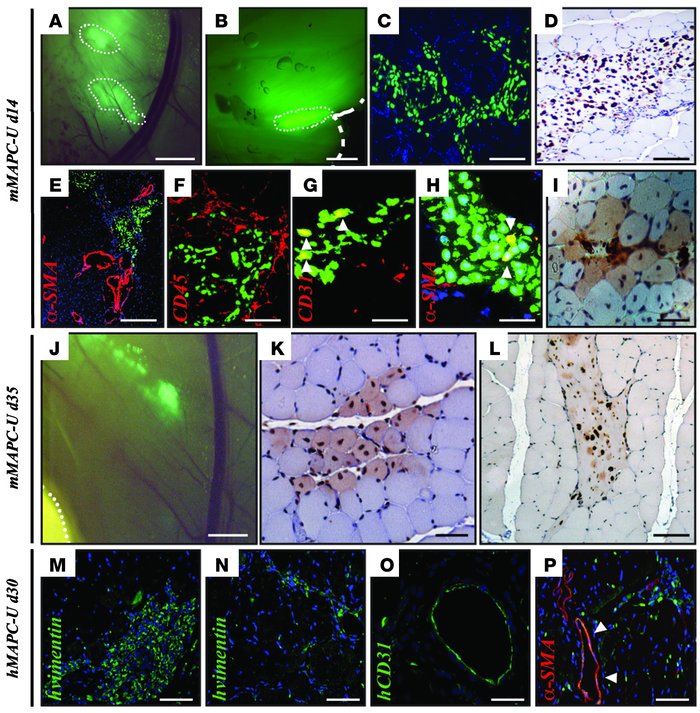 (–) At 14 days, cell patches (dotted lines in and ) were found by in vivo () or ex vivo () imaging, GFP fluorescence (), and anti-GFP staining in cross sections (). Note positioning of the patches near α-SMA+ (red in ) vessels and the surrounding CD45+ (red in ) clusters. (–) At 14 days, confocal imaging revealed some GFP+ cells coexpressing CD31 or α-SMA (arrowheads in and , respectively). A limited number of regenerating SkMBs were GFP+ (thus donor derived; revealed by anti-GFP staining; ). (–) At 5 weeks, mMAPC-U persisted (shown by in vivo imaging, ; and anti-GFP staining, and ). Note that donor-derived regenerating fibers (GFP+ cells in ) were still apparent and that cell number was less than it was at 14 days (compare and ). (–) At 30 days, hMAPC-U stably engrafted (revealed by large human vimentin+ [green] cell patches intercalated between muscle fibers [ and ] and as scattered cells around vessels []). Cells were detected in the endothelial layer of vessels by a human-specific anti-CD31 antibody (green in ), indicating EC differentiation, and in some cells the human vimentin signal (green) colocalized (yellow; white arrowheads) with α-SMA (red), indicating their SMC identity in . Images in , , , , –, , , , and are from adductor; images in , , , and from gastrocnemius and from quadriceps muscle. DAPI was used as nuclear counterstain in and and – and Topro (Molecular Probes) in and . Scale bars: 50 μm (–, ), 100 μm (, , , , , , and ), 200 μm ( and ), and 500 μm (, , and ).