The effectiveness of IFN-α2b for human multiple myeloma has been variable. TRAIL has been proposed to mediate IFN-α2b apoptosis in myeloma. In this study we assessed the effects of IFN-α2b signaling on the apoptotic activity of TRAIL and human myeloma cell survival. While TRAIL was one of the most potently induced proapoptotic genes in myeloma cells following IFN-α2b treatment, less than 20% of myeloma cells underwent apoptosis. Thus, we hypothesized that an IFN-stimulated gene (ISG) with prosurvival activity might suppress TRAIL-mediated apoptosis. Consistent with this, IFN-α2b stabilized mitochondria and inhibited caspase-3 activation, which antagonized TRAIL-mediated apoptosis and cytotoxicity after 24 hours of cotreatment in cell lines and in fresh myeloma cells, an effect not evident after 72 hours. Induced expression of G1P3, an ISG with largely unknown function, was correlated with the antiapoptotic activity of IFN-α2b. Ectopically expressed G1P3 localized to mitochondria and antagonized TRAIL-mediated mitochondrial potential loss, cytochrome c release, and apoptosis, suggesting specificity of G1P3 for the intrinsic apoptosis pathway. Furthermore, RNAi-mediated downregulation of G1P3 restored IFN-α2b–induced apoptosis. Our data identify the direct role of a mitochondria-localized prosurvival ISG in antagonizing the effect of TRAIL. Curtailing G1P3-mediated antiapoptotic signals could improve therapies for myeloma or other malignancies.

Effects of IFN-α2b on myeloma cell viability and cell signaling. 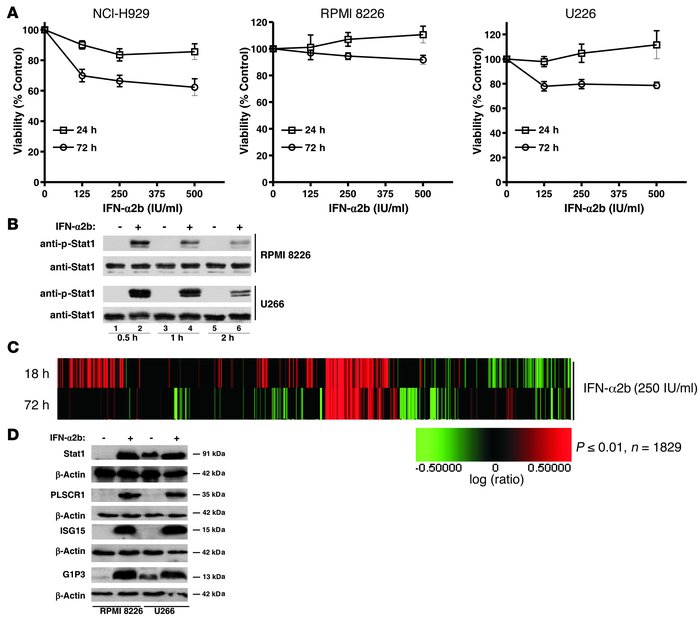 () Effect of IFN-α2b on myeloma cell viability. NCI-H929, RPMI 8226, and U266 cells were treated with increasing concentrations of IFN-α2b for 24 or 72 hours. Graphs represent viability assay results from 3 independent experiments done with 6 replicates. Each point in the graph represents mean ± SEM. Student’s test analysis showed < 0.0001 for each cell line at all IFN-α2b concentrations compared with control. () IFN-α2b–induced Stat1 tyrosine phosphorylation. RPMI 8226 and U266 cells were left untreated or were treated with IFN-α2b (250 IU/ml) for 0.5, 1, and 2 hours. Immunoblotting with an anti–phospho-Stat1 antibody identified increased Stat1 phosphorylation. Reprobing with an anti-Stat1 antibody confirmed equal amounts of Stat1. () Effects of IFN-α2b on global gene expression in RPMI 8226 cells. RNA isolated from RPMI 8226 cells left untreated or treated with IFN-α2b (250 IU/ml) for 18 or 72 hours was subjected to microarray analysis. () IFN-α2b induced ISGs in RPMI 8226 and U266 cells. Cells were left untreated or treated with 250 IU/ml of IFN-α2b for 24 hours, and 40 μg of total protein was analyzed by Western blotting with Stat1-, PLSCR1-, p15-, and G1P3-specific antibodies. β-Actin levels were assessed as controls.