Proinflammatory agents trypsin and mast cell tryptase cleave and activate PAR2, which is expressed on sensory nerves to cause neurogenic inflammation. Transient receptor potential A1 (TRPA1) is an excitatory ion channel on primary sensory nerves of pain pathway. Here, we show that a functional interaction of PAR2 and TRPA1 in dorsal root ganglion (DRG) neurons could contribute to the sensation of inflammatory pain. Frequent colocalization of TRPA1 with PAR2 was found in rat DRG neurons. PAR2 activation increased the TRPA1 currents evoked by its agonists in HEK293 cells transfected with TRPA1, as well as DRG neurons. Application of phospholipase C (PLC) inhibitors or phosphatidylinositol-4,5-bisphosphate (PIP2) suppressed this potentiation. Decrease of plasma membrane PIP2 levels through antibody sequestration or PLC-mediated hydrolysis mimicked the potentiating effects of PAR2 activation at the cellular level. Thus, the increased TRPA1 sensitivity may have been due to activation of PLC, which releases the inhibition of TRPA1 from plasma membrane PIP2. These results identify for the first time to our knowledge a sensitization mechanism of TRPA1 and a novel mechanism through which trypsin or tryptase released in response to tissue inflammation might trigger the sensation of pain by TRPA1 activation. 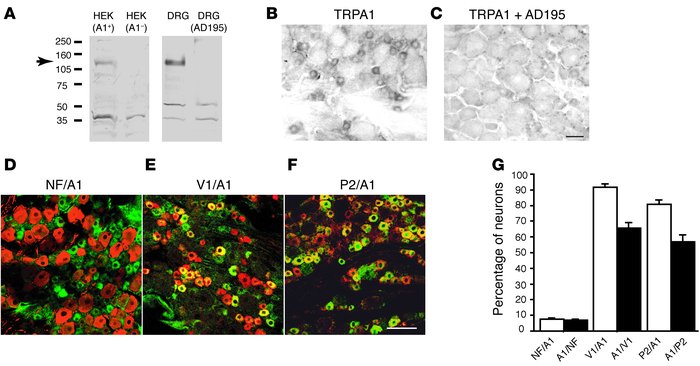 () The TRPA1 antibody recognized an expected band (~128 kDa) in the Western blot from HEK cells heterogeneously expressing TRPA1 (left column) or from the rat DRG lysate (right column) but did not recognize the control HEK cells [HEK (A1–)] or DRG lysate pretreated with an excess of the antigenic peptide AD195 [DRG (AD195)]. ( and ) TRPA1 detected by immunohistochemistry in rat DRG neurons. The photographs show that TRPA1 was expressed in small DRG neurons (); the label was eliminated by incubation of the antibody with an excess of the antigenic peptide AD195 (). () Double immunostaining of TRPA1 (green) and NF200 (red) showed the TRPA1 expression in unmyelinated neurons of the rat DRG. () Double immunostaining of TRPA1 (green) and TRPV1 (red) showed that almost all of the TRPA1 were colocalized with TRPV1 in the rat DRG neurons. () Double immunostaining of TRPA1 (green) and PAR2 (red) showed that a large population of TRPA1 was colocalized with PAR2 in the rat DRG neurons. Yellow indicates double labeling. () Percentages of colocalization of NF200/TRPA1, TRPV1/TRPA1, and PAR2/TRPA1 in the DRG neurons. V1, TRPV1; A1, TRPA1; NF, NF200; P2, PAR2. Scale bars: 100 μm.