We investigated whether TGF-β induced by anticancer therapies accelerates tumor progression. Using the MMTV/PyVmT transgenic model of metastatic breast cancer, we show that administration of ionizing radiation or doxorubicin caused increased circulating levels of TGF-β1 as well as increased circulating tumor cells and lung metastases. These effects were abrogated by administration of a neutralizing pan–TGF-β antibody. Circulating polyomavirus middle T antigen–expressing tumor cells did not grow ex vivo in the presence of the TGF-β antibody, suggesting autocrine TGF-β is a survival signal in these cells. Radiation failed to enhance lung metastases in mice bearing tumors that lack the type II TGF-β receptor, suggesting that the increase in metastases was due, at least in part, to a direct effect of TGF-β on the cancer cells. These data implicate TGF-β induced by anticancer therapy as a prometastatic signal in tumor cells and provide a rationale for the simultaneous use of these therapies in combination with TGF-β inhibitors. 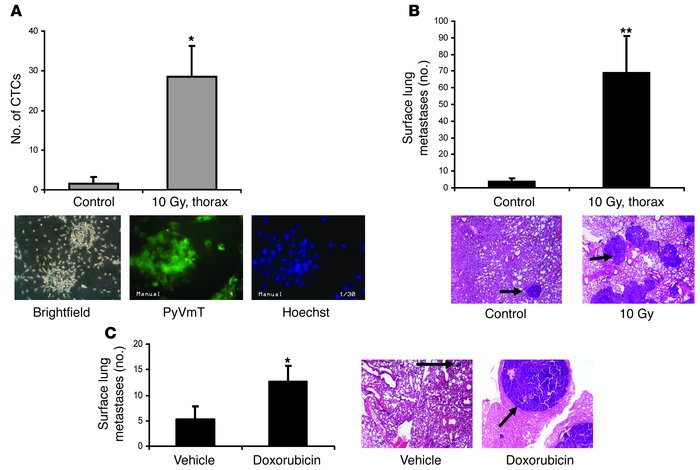 () Female female mice were subjected to thoracic irradiation at 8 weeks of age. At 13 weeks, blood was collected via heart puncture at the termination of the experiment, and its cellular fraction evaluated for its ability to form colonies ex vivo as described in Methods. CTCs, circulating tumor cells. Representative images of colonies arising from single circulating tumor cells harvested from mouse blood are shown below. Transgene-positive colonies were assessed under a fluorescence microscope using a PyVmT antibody and a fluorescent secondary antibody. () In same mice as in , surface lung metastases were counted at 13 weeks of age. Data in and are representative of 3 independent experiments with 4 mice per group. Representative H&E-stained sections of lung tissues from control and irradiated transgenic mice obtained 5 weeks after thoracic radiation are shown below. Black arrows indicate lung metastases. () Eight-week-old tumor-bearing transgenic mice were treated 3 times with vehicle or doxorubicin (5 mg/kg i.p.) at 21-day intervals. The experiment was terminated on week 15, and surface lung metastases were counted. Representative H&E-stained lung sections containing metastatic foci are shown at right. Original magnification, ×100. * < 0.05, ** < 0.01 versus control.