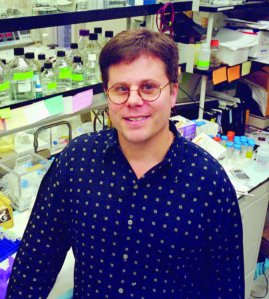 Robert Costa died September 1, 2006, from complications of pancreatic cancer. With Rob’s death we lost an outstanding scientist, a generous colleague, and a wonderful person.

I first met Rob in 1995, and we became close friends immediately, due to a shared history: we had both completed our PhDs in virology before pursuing postdoctoral research on liver gene expression with James Darnell at the Rockefeller University. Rob had obtained his PhD with Ed Wagner, studying transcriptional regulation of gene expression in herpes simplex virus. Rob’s interest in regulation of gene expression never wavered and formed the platform for all of his future studies. When he joined Darnell’s group, the lab had been attempting to identify factors that were thought to control expression of transthyretin and α1-antitrypsin in the liver. This research ultimately resulted in the identification and purification of the first mammalian forkhead protein, hepatocyte nuclear factor 3 (HNF3/FoxA), by Eseng Lai and the nuclear receptor HNF4α by Frances Sladek, both of whom were also postdocs with Darnell.

In 1989, Rob established his own lab at the University of Illinois at Chicago, where he began an independent career that was extraordinarily productive. He identified nine new members of the Fox transcription factor family, including FoxM1b, which became a major focus of Rob’s lab. Early analyses revealed that not only was FoxM1b essential for embryonic development, but it also played an integral role in controlling mitotic exit. When Rob’s research team upregulated FoxM1b expression in the livers of aged mice, regeneration was as efficient as in young mice. Based on the restorative potential of FoxM1b, Rob nicknamed it the “fountain-of-youth” gene, and with his typical sense of humor stated that “Ponce de Leon was looking in the wrong place for the fountain of youth; he should have been looking for FoxM1B.”

Rob’s lab revealed that FoxM1B has an essential role in the formation of hepatocellular carcinomas and that it is negatively regulated by the tumor suppressor p19ARF. Based on this study, he designed a p19ARF peptide mimetic that was capable of inhibiting hepatocellular carcinoma progression in animals. He was extremely excited about the possibility of developing anticancer therapies based on targeting FoxM1b. When Rob was excited about a finding, you could see it in his eyes, which would light up as he discussed his results. It was always fun to listen to him present his work at conferences — his talks were always animated, spirited, and his enthusiasm infectious.

Rob was not only an extremely talented scientist and researcher, but he was also an exemplary person. In conversations with colleagues after his death, I heard over and over how generous Rob was not only with his reagents and expertise, but also with that most precious of commodities, his time. This was true for students, postdocs, and faculty alike. Like most other lab heads, when I’m asked for a reagent, I am inevitably distracted and require multiple nudges to ensure that I get my act together. In contrast, anytime I requested a reagent from Rob, I received it by FedEx the next day, usually accompanied with a handwritten note wishing me the best of luck. I remember discussing this with Sladek, and she reminisced that Rob was similarly selfless even when he was a postdoc in the Darnell lab, where egos were sometimes the size of the Empire State Building. When she first arrived in the lab to begin the purification of HNF4α, Rob spent hours teaching her everything he knew about the preparation of nuclear extracts, gel shifts, transient transfection analyses, and oligonucleotide column purification. This generosity of spirit never left Rob. Even when his lab had grown to become a large operation funded by multiple NIH grants, he would always make time to discuss problems, whether they were scientific, personal, or political.

Rob was also an eternal optimist, a true believer that things would always work. Obstacles didn’t exist for Rob; they were merely bumps in the road that he would have fun navigating around. He had a great sense of humor and was never afraid to laugh at himself, even at the end. When Rob called to let me know that he had been diagnosed with pancreatic cancer, I was shocked and quite upset. I was aware of how grim the prognosis was, and I was deeply concerned for him and his family. When I asked how he was feeling, he laughed a deep belly laugh and answered, “Pretty good! I’ve lost a lot of weight and I’m thinking of marketing this as an alternative to dieting.” Rob’s laugh was rich, warm, and infectious, and I’ll miss hearing it.

The other major aspect of Rob’s life was his family. His wife, Jane, and son, Sam, meant the world to him. Every time we talked, he would tell me stories of how things were going at home and how Sam was growing up way too fast. On several occasions he had said he couldn’t possibly manage to run his lab without Jane; and knowing Jane, I believe him.

Rob has left us all with a rich legacy in both his work on liver gene expression and in the talented students and postdocs that he has trained. I have no doubt his work will form the basis for future advances in the treatment and understanding of cancer. I only wish that he could be here to see them.