Dopamine- and cAMP-regulated phosphoprotein of molecular weight 32 kDa (DARPP-32), encoded by PPP1R1B, is a pivotal integrator of information in dopaminoceptive neurons, regulating the response to neuroleptics, psychotomimetics, and drugs of abuse, and affecting striatal function and plasticity. Despite extensive preclinical work, there are almost no data on DARPP-32 function in humans. Here, we identify, through resequencing in 298 chromosomes, a frequent PPP1R1B haplotype predicting mRNA expression of PPP1R1B isoforms in postmortem human brain. This haplotype was associated with enhanced performance on several cognitive tests that depend on frontostriatal function. Multimodal imaging of healthy subjects revealed an impact of the haplotype on neostriatal volume, activation, and the functional connectivity of the prefrontal cortex. The haplotype was associated with the risk for schizophrenia in 1 family-based association analysis. Our convergent results identify a prefrontal-neostriatal system affected by variation in PPP1R1B and suggest that DARPP-32 plays a pivotal role in cognitive function and possibly in the pathogenesis of schizophrenia.

Genetic variation in the region, showing the genotyped SNPs and their LD. 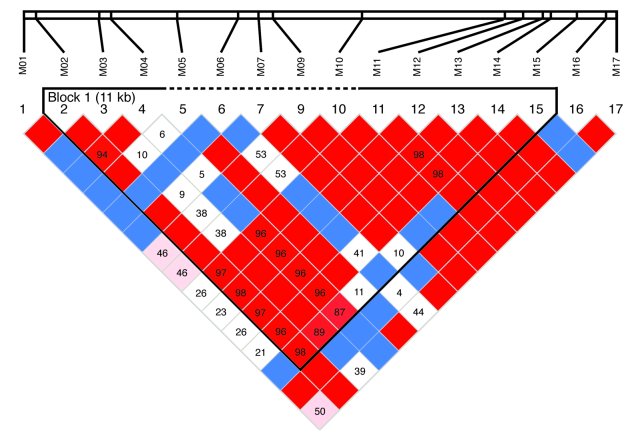 Top row shows relative positions of the SNPs (see Table for numbering). Below is a color-coded display of LD: strong LD (D'), red; weak LD, pink; weaker LD, white; not calculated, blue boxes. The haplotype block defined by the method of Gabrieli et al. that was used for association with biological and clinical phenotypes is marked by a black outline (output of the program Haploview). See Tables and and in Methods for details.