Accumulation of β-amyloid peptide (Aβ) in the brain is believed to trigger a complex and poorly understood pathologic reaction that results in the development of Alzheimer’s disease (AD). Despite intensive study, there is no consensus as to how Aβ accumulation causes neurodegeneration in AD. In this issue of the JCI, Tesseur et al. report that the expression of TGF-β type II receptor (TβRII) by neurons is reduced very early in the course of AD and that reduced TGF-β signaling increased Aβ deposition and neurodegeneration in a mouse model of AD (see the related article beginning on page 3060). Intriguingly, reduced TGF-β signaling in neuroblastoma cells resulted in neuritic dystrophy and increased levels of secreted Aβ. Collectively, these data suggest that dysfunction of the TGF-β/TβRII signaling axis in the AD brain may accelerate Aβ deposition and neurodegeneration. 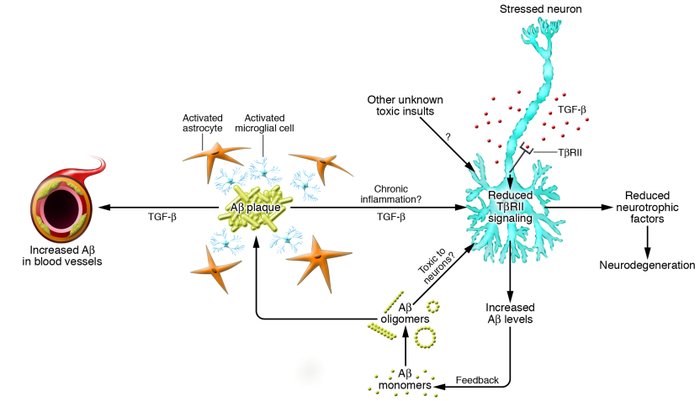 Aβ accumulates in the AD brain as amyloid within senile plaques and other smaller, soluble aggregates (oligomers). Aβ plaques are associated with a chronic inflammatory state, including reactive astro- and microgliosis and increased production of numerous inflammatory proteins. Chronic inflammation is hypothesized to induce a complex set of changes in neurons that may ultimately lead to neurodegeneration. The neuroprotective cytokine TGF-β is increased in AD and may reduce deposition of Aβ as plaques while enhancing deposition in the cerebral vessels. In this issue of the , Tesseur et al. () show that there is reduced TGF-β signaling in the AD brain, which in turn may promote neuronal degeneration by suppression of neurotrophic factor expression or dysfunction of other unknown neuroprotective pathways. Decreased TGF-β signaling in neurons may also increase Aβ levels, enhancing amyloid deposition. Thus, the inflammatory response to Aβ deposits may initiate a positive feedback loop that exacerbates, rather than ameliorates, AD pathology.