Celiac disease is characterized by small-intestinal mucosal injury and nutrient malabsorption in genetically susceptible individuals in response to the dietary ingestion of wheat gluten and similar proteins in barley and rye. Disease pathogenesis involves interactions among environmental, genetic, and immunological factors. Although celiac disease is predicted by screening studies to affect approximately 1% of the population of the United States and is seen both in children and in adults, 10%–15% or fewer of these individuals have been diagnosed and treated. This article focuses on the role of adaptive and innate immune mechanisms in the pathogenesis of celiac disease and how current concepts of immunopathogenesis might provide alternative approaches for treating celiac disease. 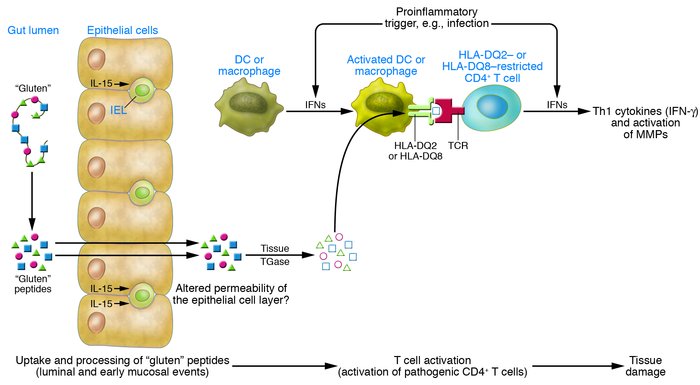 This schematic divides the pathogenesis of CD into 3 major series of events: luminal and early mucosal events; the activation of pathogenic CD4+ T cells; and the subsequent events leading to tissue damage. During the luminal and early mucosal events, key features include the ingestion of “gluten” by a genetically susceptible individual. “Gluten” is not fully digested because of its high proline content, and this gives rise to a number of large undigested “gluten” peptides. The peptides cross the epithelial barrier to the lamina propria and encounter tissue TGase and APCs that express HLA-DQ2 or HLA-DQ8 heterodimers that are ideally suited to bind proline-rich peptides containing negatively charged glutamic acid residues as a result of glutamine deamidation by tissue TGase. In a further series of events, the APCs present some of these peptides to HLA-DQ2– and HLA-DQ8–restricted populations of CD4+ T cells that become activated and release mediators that ultimately lead to tissue damage. There are still many unknowns. These include the mechanism by which “gluten” peptides cross the epithelial cell barrier, the role of innate immunity and IELs in both the early and the late phases of CD pathogenesis, the role of IL-15 and type I IFNs in disease pathogenesis, the underlying basis for the release of tissue TGase that leads to deamidation of gluten peptides, and the sequence of, and relationship between, CD4+ T cell responses and the responses of the IEL population.