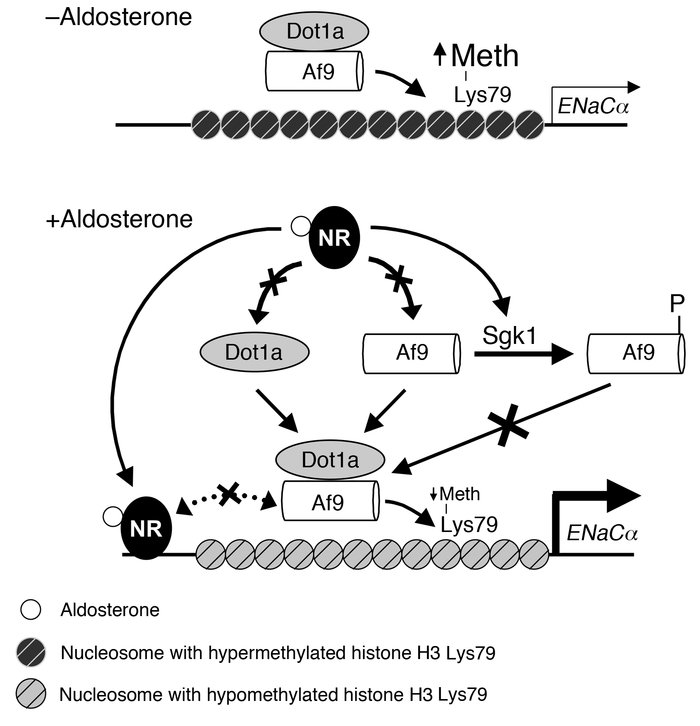 Under basal conditions, Dot1a and Af9 form a nuclear complex that directly or indirectly binds specific sites of the α promoter, leading to hypermethylation of histone H3 Lys79 and repression of α transcription. Aldosterone stimulates α transcription by regulating 2 different pathways. In the classical pathway, aldosterone binds and activates the nuclear hormone receptors (NR) that are either glucocorticoid receptor and/or mineralocorticoid receptor homo- or heterodimers to bind the glucocorticoid response element in the α promoter and transactivate α. In a parallel pathway, aldosterone releases the repression of α by (a) downregulating Dot1a () and Af9 expression (), and thus the amount of Dot1a-Af9 complex, presumably via nuclear receptor–dependent or –independent (not shown) mechanisms and/or (b) decreasing the Dot1a-Af9 interaction via Sgk1-mediated phosphorylation of Af9 to limit their availability, leading to histone H3 Lys79 hypomethylation at specific subregions of the α promoter. Sgk1 might join and downregulate the Dot1a-Af9 complex associated with the α promoter (not shown for simplicity). In all cases, Af9-free Dot1a binds DNA nonspecifically and catalyzes histone H3 Lys79 methylation throughout the genome under basal conditions (not shown). A hypothetical opposing interaction between the nuclear receptor–aldosterone complex and the Dot1a-Af9 complex (dotted line) may tune the ultimate level of α transcription. Meth, methylation.