Sgk1 phosphorylates Af9 and regulates transcription of α and other aldosterone target genes in vivo in mouse kidneys. 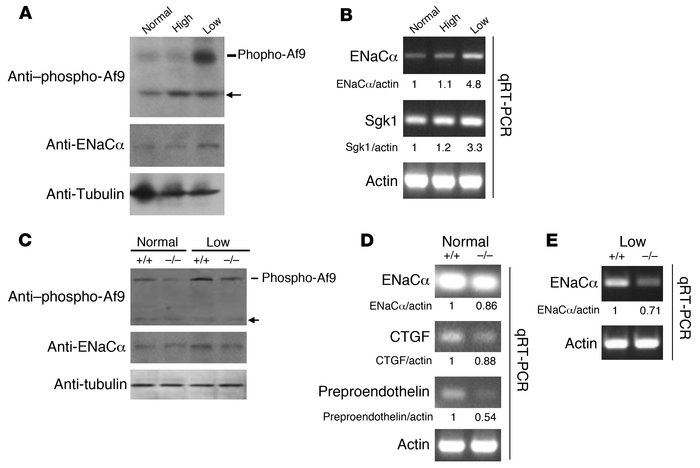 ( and ) Low-salt diet coordinately increases Af9 phosphorylation and mRNA expression of Sgk1 and ENaCα in mouse kidneys. Whole lysates from the right kidneys of WT mice () fed the indicated diet were pooled within the group ( = 3 in each group, similar for –) and analyzed by IB probed with the antibodies shown. Similarly, total RNA from the left kidneys was pooled within the group ( = 3) and analyzed with primers specific for the indicated genes. Representative agarose gel analyses of the final quantitative RT-PCR with the mean of 3 different measurements are shown. SEM was less than 20% in all cases. (–) Af9 phosphorylation is regulated by salt intake, is achieved in an Sgk1-dependent or -independent manner, and correlates with expression of several aldosterone target genes. As in , except that mice or their age- and sex-matched littermates fed the indicated diets were used and that additional aldosterone target genes were examined ( = 3 for each group and condition). Arrow denotes unknown protein. CTGF, connecting tissue growth factor.