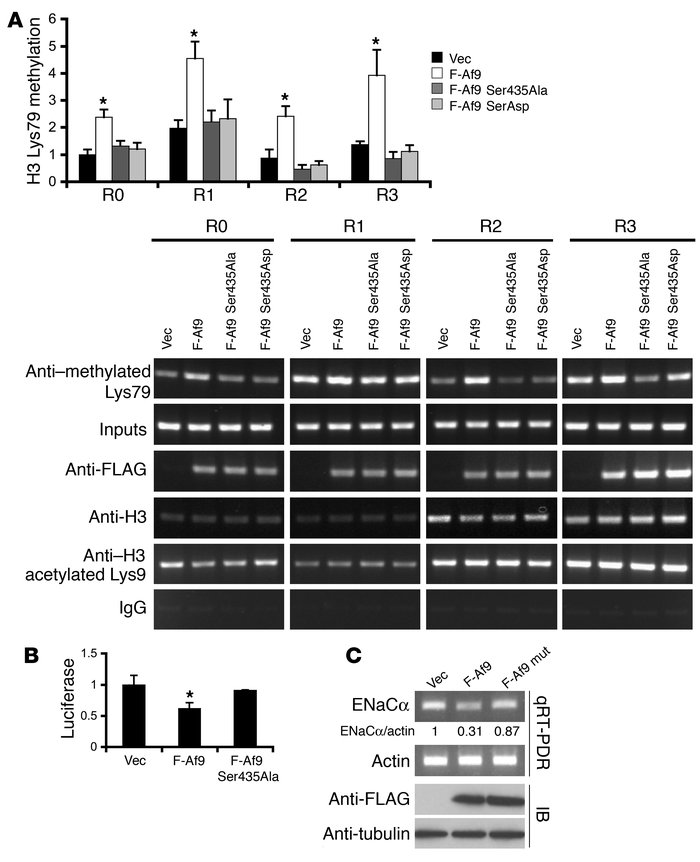 () ChIP assay showing that Af9 Ser435Ala and Ser435Asp mutations decreased Dot1a-Af9–mediated histone H3 Lys79 methylation, but not Af9 association with the α promoter, in mIMCD3 cells. pFLAG-Af9, pFLAG-Af9 Ser435Ala, and pFLAG-Af9 Ser435Asp were used, and ChIP assays were performed with the indicated antibodies ( = 3–4). The relative histone H3 Lys79 methylation of R0 from the vector-transfected cells was assigned as 1. Representative agarose gel analyses of the final quantitative PCR products are shown to verify the quantification determined by quantitative real-time PCR for each sample. () Luciferase assay indicating that the Ser435Ala mutation impaired Af9-dependent repression of α promoter activity. mIMCD3 cells stably carrying pGL3Zeocin-1.3α () were transiently transfected with pCMV500, pFLAG-Af9, or pFLAG-Af9 Ser435Ala, followed by luciferase assay ( = 4). 0.05 versus vector control. () Quantitative RT-PCR (qRT-PCR) demonstrating that the Ser435Ala mutation partially relieves Af9-dependent repression of endogenous α transcription. As in , except that total RNA was analyzed by quantitative real-time RT-PCR with primers specific for α or β-actin as control and that whole-cell lysates were examined by IP with the indicated antibodies. The relative level of α mRNA was normalized to actin in the same sample, and that of vector-transfected cells was assigned as 1. The means of 3 independent measurements with SE less than 20% are shown.