Sgk1 associates with and downregulates Dot1a-Af9 interaction at the α promoter. 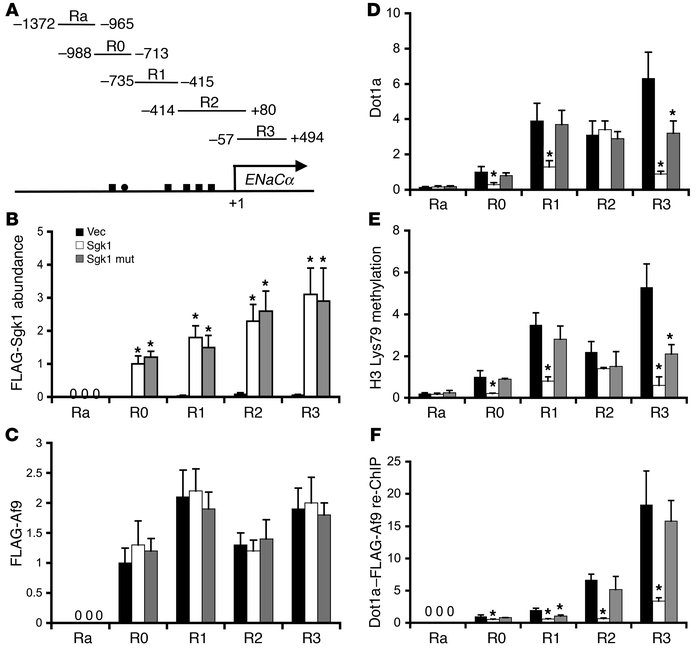 () Diagram of the α promoter (). () ChIP assay showing association of WT and kinase-dead mutant Sgk1 with the R0–R3, but not Ra, subregions of the α promoter. Chromatin was immunoprecipitated by anti-FLAG antibody from mIMCD3 cells transfected with pCMV500, WT pFLAG-Sgk1, or mutant pFLAG-Sgk1 Lys127Met, followed by quantitative real-time PCR with primers amplifying the Ra and R0–R3 subregions of α promoter as shown in ( = 3). FLAG-Sgk1 abundance in R0 from the FLAG-Sgk1–transfected cells was assigned as 1. (–) ChIP and sequential ChIP assays demonstrating that overexpression of Sgk1 differentially affected the abundance of FLAG-Af9 (), Dot1a (), histone H3 Lys79 methylation (), and FLAG-Af9 interaction with Dot1a () at the α promoter. mIMCD3 cells were cotransfected with pFLAG-Af9 and pcDNA3.1 or its derivatives expressing Sgk1 or its kinase-dead mutant, followed by ChIP with the indicated antibodies. For sequential ChIP (re-ChIP), chromatin was sequentially immunoprecipitated with anti-FLAG and anti-Dot1a antibodies. Relative ChIP or sequential ChIP efficiency was defined as the amount of (re)immunoprecipitated material compared with that of the initial input sample and was assigned as 1 in R0 from vector-transfected cells ( = 3–6). No Ra expression was detected in , , or . * < 0.05 versus vector control.