Af9 Ser435 is phosphorylated by Sgk1 in vitro and is a major phosphorylation site in mIMCD3 cells. 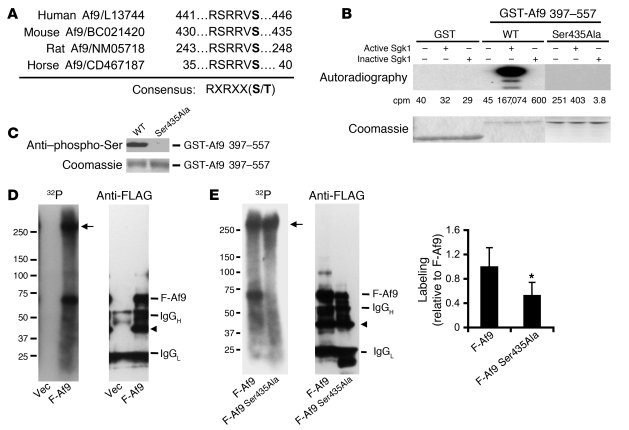 () Af9 possesses a highly conserved putative phosphorylation site, Ser435, for Sgk1. Shown are aa sequences surrounding Ser435 of Af9 (in bold) from different species. () Sgk1 phosphorylates Af9 in vitro. GST, WT GST-Af9 397–557, or GST-Af9 397–557 Ser435Ala purified from was phosphorylated in vitro in the presence of [γ-32P]ATP, separated by SDS-PAGE, stained (bottom), and autoradiographed (top). Mean 32P values (in cpm) of the corresponding bands are shown, with SE less than 25% in all cases ( = 3). () Af9 phosphorylation by Sgk1 requires Ser435. As in , except for omission of [γ-32P]ATP ( = 3). () Af9 is phosphorylated in mIMCD3 cells. mIMCD3 cells transfected with pCMV500 vector (Vec) or pFLAG-Af9 (F-Af9) were labeled with [32P]orthophosphate and analyzed by IP-IB with the FLAG M2 antibody. A representative autoradiograph (left) and corresponding IB (right) are shown ( = 3). Arrow denotes unknown protein; arrowhead denotes possibly degraded Af9 fusions. () Af9 Ser435 is a major phosphorylation site in mIMCD3 cells. As in, except that pFLAG-Af9 Ser435Ala construct (F-Af9 Ser435Ala) replaced pCMV500. A weak band migrating at the position of FLAG-Af9 Ser435Ala was visible after exposure of 12 more hours. Plot of the 32P signal normalized to the corresponding protein abundance of each Af9 fusion, with WT Af9 labeling assigned as 1 ( = 5). * < 0.05.