Intracellular dsRNA induces the expression of immunoproteasome subunits by the secretion of type I IFN. 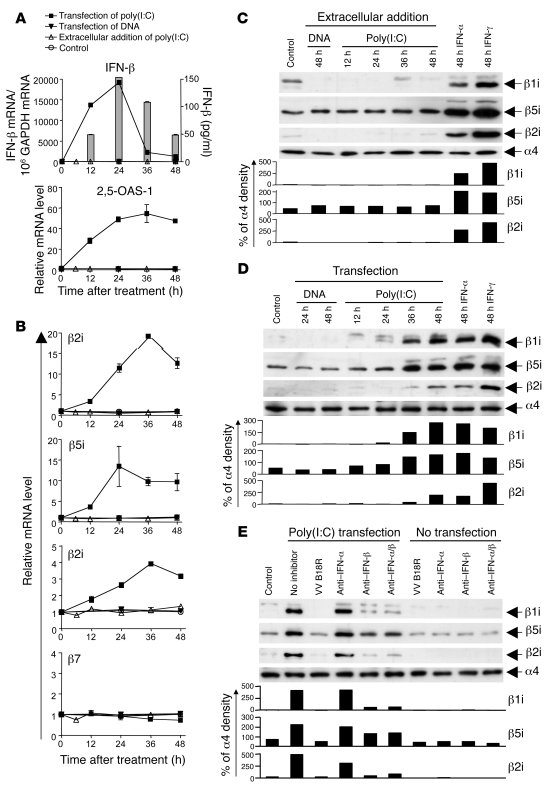 Huh-7 cells were transfected with 10 μg poly(I:C) (squares) or 10 μg pcDNA3.1 plasmid DNA (inverted triangles), treated with 10 μg/ml extracellular poly(I:C) (triangles), or were mock transfected (circles). () Quantitation of IFN-β and 2,5-OAS-1 mRNA by real-time PCR. Bars (indicating secreted IFN-β) are shown only for the poly(I:C)-transfected Huh-7 cells because no secreted IFN-β was detectable in the control cultures of DNA-transfected Huh-7 cells or Huh-7 cells treated extracellularly with poly(I:C). () Quantitation of mRNA levels of immunoproteasome subunits β1i, β5i, β2i and constitutive subunit β7 by real-time PCR. (–) Detection of immunoproteasome subunits β1i, β5i, and β2i by Western blot analysis. ( and ) Huh-7 cells were treated with IFN-α and IFN-γ as well as () treated with extracellular DNA and poly(I:C) or () transfected with DNA and poly(I:C). () Four hours after poly(I:C) transfection of Huh-7 cells, 5,000 U/ml neutralizing anti–IFN-α and 2,000 U/ml neutralizing anti–IFN-β, alone or in combination, as well as 1 μg/ml VV B18R protein were added into culture and incubated for 48 hours, and Western blot was performed to detect immunoproteasome subunits. Anti–IFN-α/β, combination of IFN-α– and IFN-β–neutralizing antibodies. The density of the Western blot bands was quantified and expressed as percent of the density of the α4 control band.