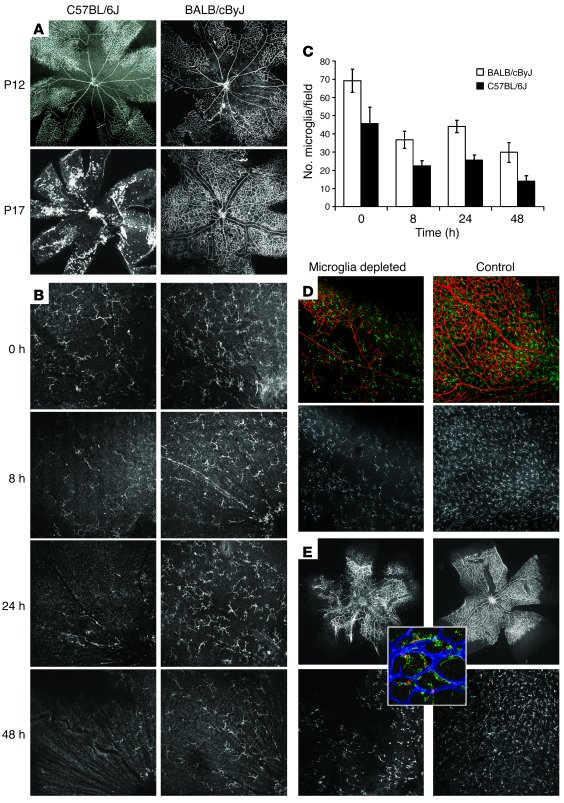 Comparing C57BL/6J and BALB/cByJ strains revealed a difference in the number of CD11b+ microglia during the ischemic phase of OIR. () In whole mounts, both strains showed similar vaso-obliteration in the central retina at P12. However, at P17, there were dramatic differences in the vasculature, with C57BL/6J showing abundant neovascular tufts and little revascularization of the central retina. () C57BL/6J retinas contained fewer CD11b+ microglia over the course of 48 hours of ischemia compared with BALB/cByJ. The optic nerve head is positioned at the lower right in all images. () Quantification of CD11b+ microglia over time shows that C57BL/6J retinas had fewer microglia at P12 (0 hours) and less than half the number of microglia present in the retinas of BALB/cByJ mice at P14 (48 hours of ischemia). ≤ 0.02 for BALB/cByJ versus C57BL/6J at all time points ( = 8–11). () Microglia depletion in C57BL/6J induced dramatic loss of preexisting microvasculature during retinal development. Injection of clodronate liposomes at P5 resulted in significant loss of CD11b+ microglia and capillary dropout at P8. Images depict similar locations in the central retina, with the optic nerve head at lower right. () Injection of clodronate liposomes into C57BL/6J at P2 caused significant depletion of CD11b+ microglia and dramatic disruption of the vasculature at P6 compared with control PBS liposome–treated fellow eye. Inset: Labeled liposomes (red) were taken up specifically by CD11b+ microglia (green) and not by GS lectin–labeled vascular cells (blue), nor any other CD11b– cells. Magnification, ×4 ( and , top panels), ×10 ( and , bottom panels), ×20 (), ×60 (, inset).