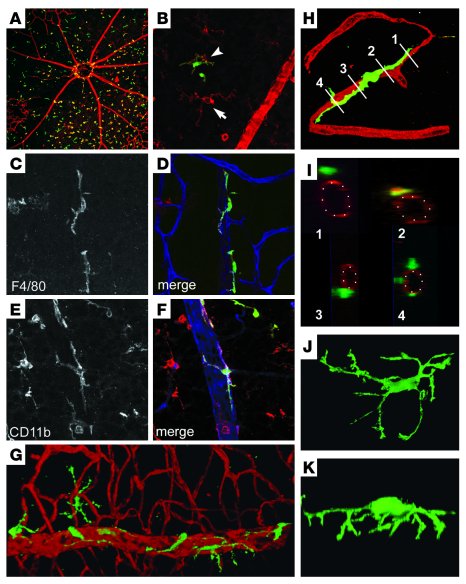 () Transplanted CD44hi cells (green) injected at P7 localized to and survived within the avascular central retina at P12. Many cells labeled with GS lectin (red), which labels microglia in the retina, and thus appear yellow. () CD44hi cells (green, arrowhead) often assumed a ramified morphology similar to endogenous microglia. Endogenous microglia (arrow) and retinal vessels were stained with GS lectin (red). (–) In addition to the intervascular localization shown in , transplanted CD44hi cells also assumed a perivascular localization and were positive for F4/80 () and CD11b (), markers of macrophages/microglia. and are merges with GFP expression (green), GS lectin (blue), and F4/80 (red, ) or CD11b (red, ). () CD44hi cells assumed both perivascular and intervascular localization (3D image). Note the ramified, microglia-like morphology of the GFP+ cells. ( and ) CD44hi cells did not form any portion of the vessel lumen, as shown by 3D imaging. The image in was rotated such that the vessel could be viewed in cross-section. () Numbered positions indicated in show that the GFP+ cell (green) was found on the outside of the CD31-labeled (dotted) endothelial lumen. ( and ) A single transplanted CD44hi cell (3D image) shown en face () and in profile () demonstrating the highly ramified morphology taken on by these cells after injection into the eye. Magnification, ×10 (), ×60 (–), ×120 ( and ).