EPEC infection causes a reduction in the expression of DRA on the plasma membrane. 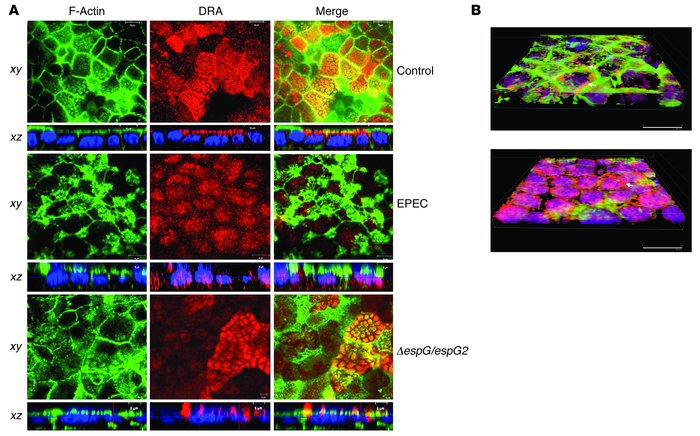 () Confocal microscopic localization of DRA (red) and Alexa Fluor 488–conjugated phalloidin (actin; green) showing vertical (; near the apical plasma membrane) and horizontal () sections. Hoechst dye labeled the nuclei (blue). At the basal level, DRA protein (red) was primarily localized in the apical membrane, with no staining in the basolateral membranes in control monolayers. EPEC-infected monolayers showed absence of DRA from the apical membrane, with marked redistribution to intracellular compartments, whereas double mutant showed predominant localization of DRA on the apical membraneNuclear staining with Hoechst dye also shows the bacterial attachment sites as indicated by the diffused pattern of nuclei (blue) in EPEC- and double mutant–infected monolayers compared with the uniform staining pattern of the nuclei in uninfected monolayers. Scale bars: 10 μm (control and EPEC), 5 μm (Δ). () Caco-2 monolayers infected with nonpathogenic () or EPEC () were stained with DRA and phalloidin, and images were converted on 3D projections generated using AutoVisualize. In monolayers infected with nonpathogenic , DRA can be seen at the apical border associated with brush border F-actin and apical plasma membrane (arrow). As described in previous studies, EPEC infection causes a dramatic reorganization of F-actin such that it is concentrated beneath bacterial attachment sites. While some apical plasma membrane DRA could still be detected (arrow), the majority of the DRA was found in the basal cytoplasm (seen as purple due to overlap with blue nuclear stain).