Epithelial-mesenchymal transition (EMT) is an important mechanism for phenotypic conversion in normal development and disease states such as tissue fibrosis and metastasis. While this conversion of epithelia is under tight transcriptional control, few of the key transcriptional proteins are known. Fibroblasts produced by EMT express a gene encoding fibroblast-specific protein 1 (FSP1), which is regulated by a proximal cis-acting promoter element called fibroblast transcription site–1 (FTS-1). In mass spectrometry, chromatin immunoprecipitation, and siRNA studies, we used FTS-1 as a unique probe for mediators of EMT and identified a complex of 2 proteins, CArG box–binding factor–A (CBF-A) and KRAB-associated protein 1 (KAP-1), that bind this site. Epithelial cells engineered to conditionally express recombinant CBF-A (rCBF-A) activate the transcription of FSP1 and undergo EMT. The FTS-1 response element also exists in the promoters modulating a broader EMT transcriptome, including Twist, and Snail, as well as E-cadherin, β-catenin, ZO 1, vimentin, α1(I) collagen, and α–smooth muscle actin, and the induction of rCBF-A appropriately alters their expression as well. We believe formation of the CBF-A/KAP-1/FTS-1 complex is sufficient for the induction of FSP1 and a novel proximal activator of EMT.

CBF-A and KAP-1 are integral parts of the FTS-1 complex. 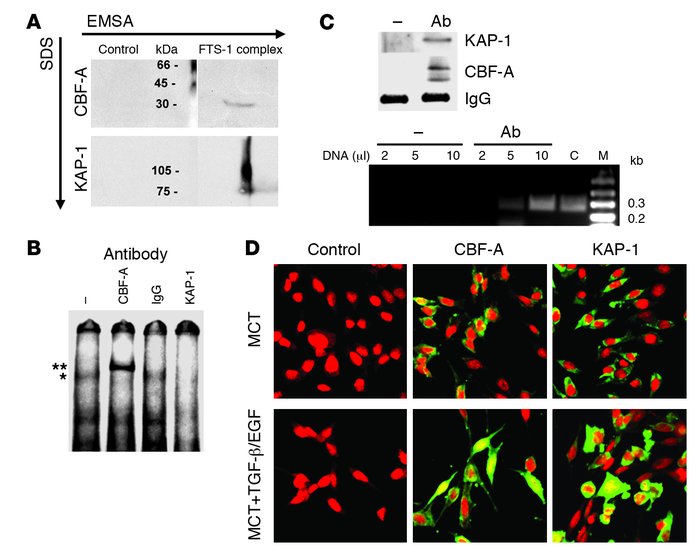 () Immunoblotting and 2D electrophoresis. First dimension: EMSA; second dimension: SDS-PAGE. Left: control for EMSA with nuclear protein without the probe; right (FTS-1 complex): protein with the FTS-1 probe. The absence of immunostaining on the left indicates that the investigated proteins do not comigrate with the complexes in the absence of DNA. () The participation of CBF-A and KAP-1 in the FTS-1 complex was confirmed by EMSA with their antibodies. The complex (*) was supershifted by the CBF-A antibody as indicated (**) and was abolished by anti–KAP-1 antibody; rabbit IgG did not affect the complex. () ChIP of 3T3 chromatin with the anti–CBF-A antibody or rabbit preimmune serum (–). Western blotting (upper panel): the immunoblots were probed with antibodies against KAP-1 and CBF-A; the stained IgG is shown as a loading control. PCR (lower panel): Increasing amounts (2, 5, and 10 μl) of DNA eluted from the immunoprecipitates were used as template in PCR with primers encompassing the FTS-1 site in both directions, producing a fragment of approximately 280 bp. Genomic DNA from 3T3 fibroblasts was used in the PCR as a positive control. M, DNA size ladder in kilobases (kb). () After induction of EMT, MCT cells showed increased nuclear colocalization of KAP-1 and CBF-A. MCT epithelia were stimulated for 5 days with TGF-β/EGF in culture. Cells were stained with nuclear propidium iodide dye (red) followed by indirect immunofluorescence with primary antibodies against CBF-A or KAP-1 or with control FITC–anti-rabbit IgG alone. Original magnification, ×630.