Epithelial-mesenchymal transition (EMT) is an important mechanism for phenotypic conversion in normal development and disease states such as tissue fibrosis and metastasis. While this conversion of epithelia is under tight transcriptional control, few of the key transcriptional proteins are known. Fibroblasts produced by EMT express a gene encoding fibroblast-specific protein 1 (FSP1), which is regulated by a proximal cis-acting promoter element called fibroblast transcription site–1 (FTS-1). In mass spectrometry, chromatin immunoprecipitation, and siRNA studies, we used FTS-1 as a unique probe for mediators of EMT and identified a complex of 2 proteins, CArG box–binding factor–A (CBF-A) and KRAB-associated protein 1 (KAP-1), that bind this site. Epithelial cells engineered to conditionally express recombinant CBF-A (rCBF-A) activate the transcription of FSP1 and undergo EMT. The FTS-1 response element also exists in the promoters modulating a broader EMT transcriptome, including Twist, and Snail, as well as E-cadherin, β-catenin, ZO 1, vimentin, α1(I) collagen, and α–smooth muscle actin, and the induction of rCBF-A appropriately alters their expression as well. We believe formation of the CBF-A/KAP-1/FTS-1 complex is sufficient for the induction of FSP1 and a novel proximal activator of EMT.

Identification and purification of the FTS-1 complex by EMSA and DNA affinity chromatography. 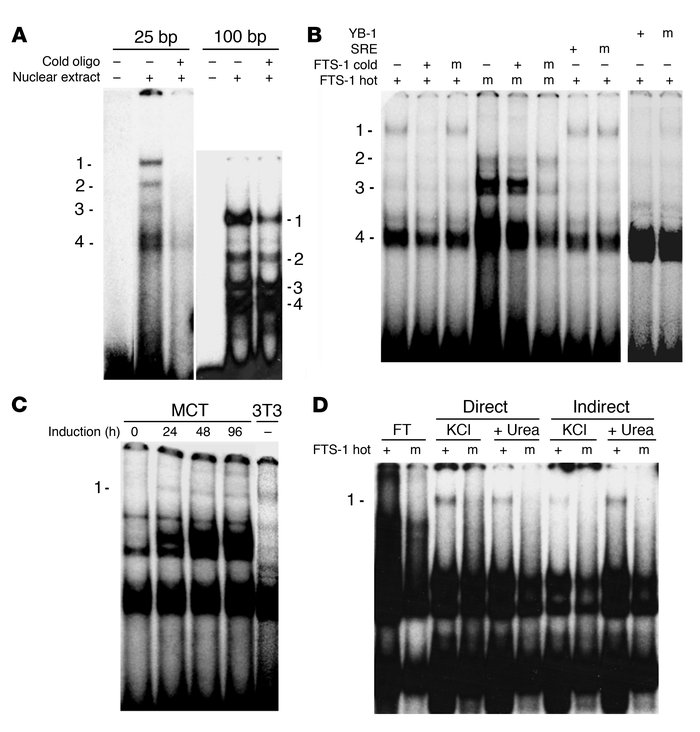 () Similar complexes form in EMSA with fibroblast nuclear protein and either 25-bp or 100-bp probes, both containing the FTS-1 core pentanucleotide. The complexes were challenged with nonlabeled probes. () Specificity of the FTS-1 complex established by EMSA following challenge by various nonlabeled competitors. Fibroblast nuclear protein was incubated with the 25-bp radiolabeled FTS-1 or its mutant form (m). The complexes were challenged with DNA probes specific for different regulatory sites. The complex specific to the TTGAT pentanucleotide (marked 1) is at the top; (m) indicates the mutated oligonucleotides. () The FTS-1 complex (marked 1) is formed by MCT cells induced to EMT as evidenced by EMSA at different times after induction. A fibroblast-derived FTS-1 complex is shown as a positive control. () DNA affinity-purified proteins form only 1 complex with FTS-1 (marked 1) in EMSA. Fractions purified by the direct or indirect approach were eluted with 0.5 M KCl followed by 0.5 M KCl plus 5 M urea, dialyzed against 0.1 M KCl, and incubated with radiolabeled FTS-1 or its mutated form (m). The flow-through (FT) from the direct incubation could not form the FTS-1 complex.