Clearance of circulating VLDL but not LDL is partially preserved in mice. 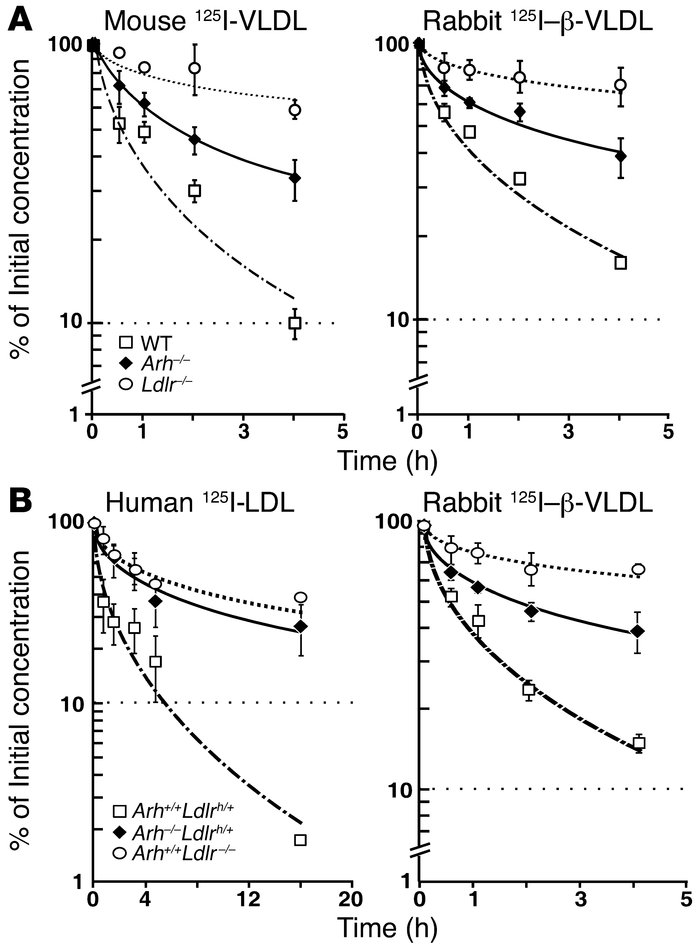 () Clearance of mouse 125I-VLDL and rabbit 125I–β-VLDL in , , and wild-type mice. Four wild-type (squares), (diamonds), and (circles) 12- to 14-week-old female mice were injected with mouse 125I-VLDL (125 cpm/ng protein) (left) or rabbit 125I–β-VLDL (288 cpm/ng protein) (right). Blood samples were collected by retro-orbital puncture at the indicated times, and the plasma content of isopropanol-precipitable 125I-radioactivity was measured. Radioactivity remaining in the plasma was plotted as a percentage of the activity present 2 minutes after injection of the labeled ligand. Before the experiment, the mice were fasted for 6 hours and anesthetized with sodium pentobarbital (80 mg/kg intraperitoneal). () Female (squares), (diamonds), and (circles) mice ( = 4 per genotype), aged 12–14 weeks, were fasted for 4 hours, anesthetized with sodium pentobarbital (80 mg/kg of intraperitoneal), and injected with 15 μg 125I-human LDL (125 cpm/ng protein) (left) or 15 μg 125I-rabbit β-VLDL (189 cpm/ng protein) (right). Blood samples were collected and processed as described above.