Prion diseases are fatal neurodegenerative diseases characterized by the accumulation of PrPSc, the infectious and protease-resistant form of the cellular prion protein (PrPC). We generated lentivectors expressing PrPC-specific short hairpin RNAs (shRNAs) that efficiently silenced expression of the prion protein gene (Prnp) in primary neuronal cells. Treatment of scrapie-infected neuronal cells with these lentivectors resulted in an efficient and stable suppression of PrPSc accumulation. After intracranial injection, lentiviral shRNA reduced PrPC expression in transgenic mice carrying multiple copies of Prnp. To test the therapeutic potential of lentiviral shRNA, we used what we believe to be a novel approach in which the clinical situation was mimicked. We generated chimeric mice derived from lentivector-transduced embryonic stem cells. Depending on the degree of chimerism, these animals carried the lentiviral shRNAs in a certain percentage of brain cells and expressed reduced levels of PrPC. Importantly, in highly chimeric mice, survival after scrapie infection was significantly extended. Taken together, these data suggest that lentivector-mediated RNA interference could be an approach for the treatment of prion disease. 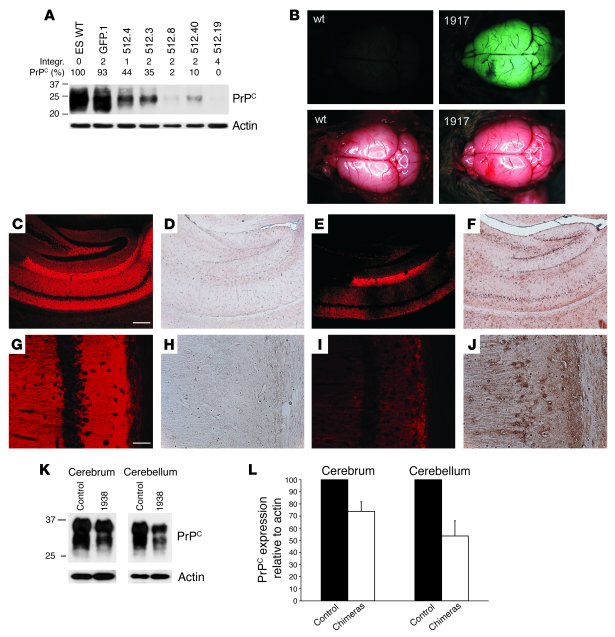