We identified cellular and molecular mechanisms within the stem cell niche that control the activity of colonic epithelial progenitors (ColEPs) during injury. Here, we show that while WT mice maintained ColEP proliferation in the rectum following injury with dextran sodium sulfate, similarly treated Myd88–/– (TLR signaling–deficient) and prostaglandin-endoperoxide synthase 2–/– (Ptgs2–/–) mice exhibited a profound inhibition of epithelial proliferation and cellular organization within rectal crypts. Exogenous addition of 16,16-dimethyl PGE2 (dmPGE2) rescued the effects of this injury in both knockout mouse strains, indicating that Myd88 signaling is upstream of Ptgs2 and PGE2. In WT and Myd88–/– mice, Ptgs2 was expressed in scattered mesenchymal cells. Surprisingly, Ptgs2 expression was not regulated by injury. Rather, in WT mice, the combination of injury and Myd88 signaling led to the repositioning of a subset of the Ptgs2-expressing stromal cells from the mesenchyme surrounding the middle and upper crypts to an area surrounding the crypt base adjacent to ColEPs. These findings demonstrate that Myd88 and prostaglandin signaling pathways interact to preserve epithelial proliferation during injury using what we believe to be a previously undescribed mechanism requiring proper cellular mobilization within the crypt niche.

and mouse rectums were susceptible to DSS-induced injury. 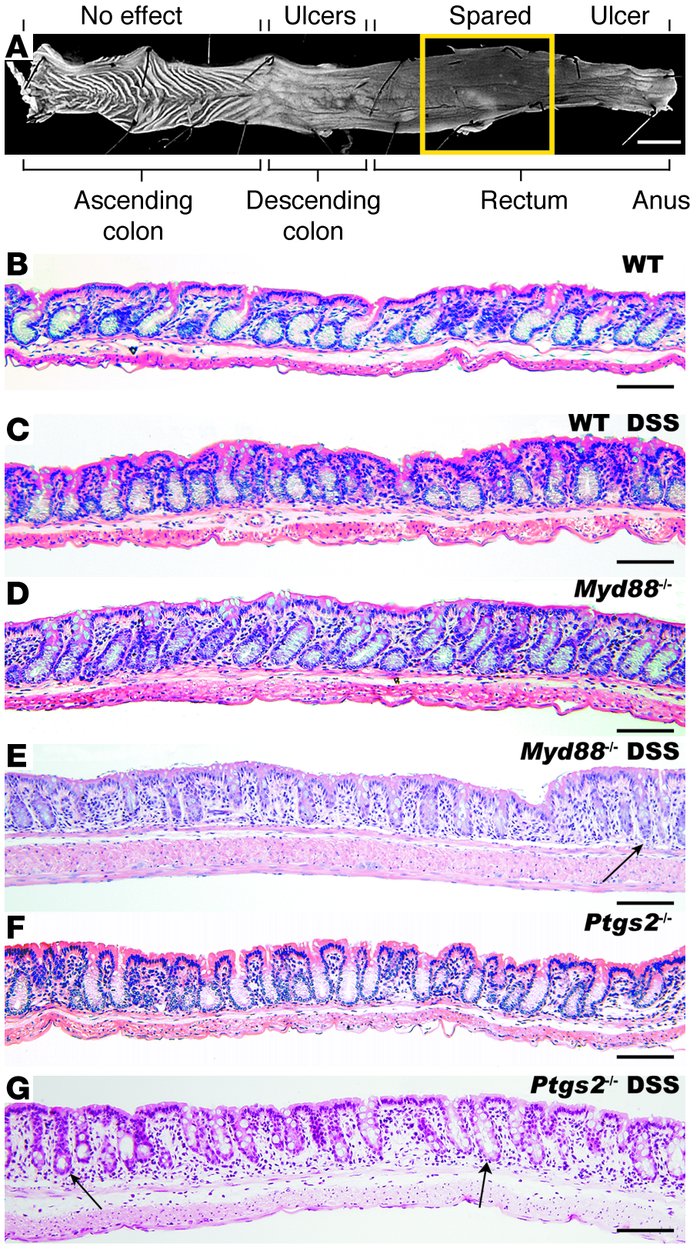 () Colon whole mount from an adult WT B6 mouse treated with 2.5% DSS for 1 week. The DSS-induced lesions (top) and the corresponding anatomic locations (bottom) are indicated. All strains analyzed in this study showed multiple small (<0.5 mm in diameter) ulcers with heaped borders in the descending colon and a confluent ulcer that extended from the ano-rectal junction proximally (0.5–1.0 cm). The intervening area in the remaining rectum (yellow boxed area) was spared of ulcerative injury. (–) H&E-stained sections of the rectums from adult B6 WT ( and ), ( and ), and ( and ) mice. (, , and ) Untreated mice. (, , and ) Mice treated for 7 days with 2.5% DSS in the drinking water. The rectums from WT DSS-treated mice were indistinguishable from those of untreated WT mice. However, DSS-treated and mice both showed a similar pattern of crypt area loss manifested by alterations in crypt morphology (including angulation and dilation of the base; arrows) as compared with untreated controls. Scale bars: 1 cm (), 100 μm (–).