The receptor tyrosine kinase/PI3K/Akt/mammalian target of rapamycin (RTK/PI3K/Akt/mTOR) pathway is frequently altered in tumors. Inactivating mutations of either the TSC1 or the TSC2 tumor-suppressor genes cause tuberous sclerosis complex (TSC), a benign tumor syndrome in which there is both hyperactivation of mTOR and inhibition of RTK/PI3K/Akt signaling, partially due to reduced PDGFR expression. We report here that activation of PI3K or Akt, or deletion of phosphatase and tensin homolog (PTEN) in mouse embryonic fibroblasts (MEFs) also suppresses PDGFR expression. This was a direct effect of mTOR activation, since rapamycin restored PDGFR expression and PDGF-sensitive Akt activation in Tsc1–/– and Tsc2–/– cells. Akt activation in response to EGF in Tsc2–/– cells was also reduced. Furthermore, Akt activation in response to each of EGF, IGF, and PMA was reduced in cells lacking both PDGFRα and PDGFRβ, implying a role for PDGFR in transmission of growth signals downstream of these stimuli. Consistent with the reduction in PI3K/Akt signaling, in a nude mouse model both Tsc1–/– and Tsc2–/– cells had reduced tumorigenic potential in comparison to control cells, which was enhanced by expression of either active Akt or PDGFRβ. In conclusion, PDGFR is a major target of negative feedback regulation in cells with activated mTOR, which limits the growth potential of TSC tumors. 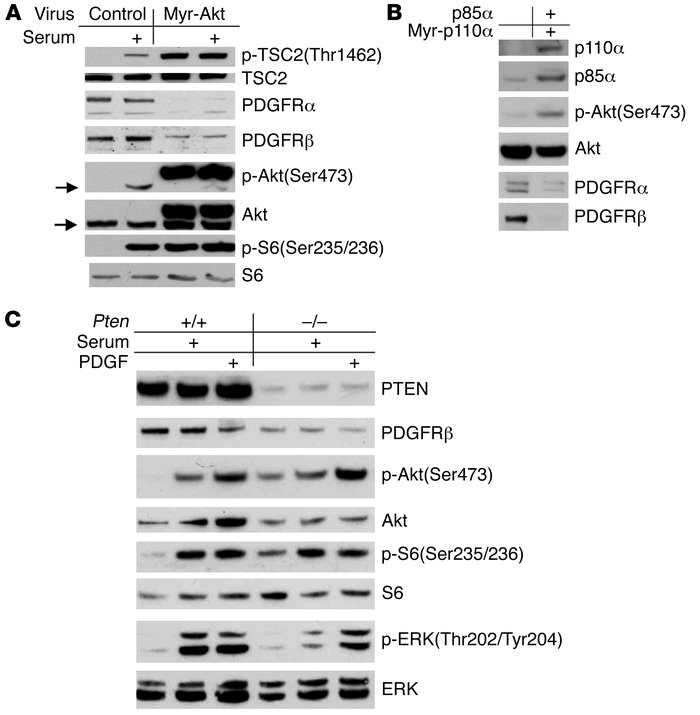 Immunoblot analysis is shown for multiple MEF lines. ( and ) MEFs were starved for 2 days and stimulated with either 10% FBS or 50 ng/ml PDGFbb for 10 minutes. () MEFs with ectopic myr-Akt have elevated p-TSC2, p-Akt, and p-S6 levels and markedly reduced PDGFRα and PDGFRβ levels in comparison to control cells. Arrows indicate endogenous Akt. () WT immortalized MEFs transiently expressing the p85α and myristoylated p110α subunits of PI3K show a marked reduction in levels of expression of both PDGFRα and PDGFRβ. () PTEN-null MEFs show increases in expression of p-Akt and p-S6, with a decrease in PDGFRβ expression.