The retinoblastoma tumor suppressor (RB) protein is functionally inactivated in the majority of human cancers and is aberrant in one-third of all breast cancers. RB regulates G1/S-phase cell-cycle progression and is a critical mediator of antiproliferative signaling. Here the specific impact of RB deficiency on E2F-regulated gene expression, tumorigenic proliferation, and the response to 2 distinct lines of therapy was investigated in breast cancer cells. RB knockdown resulted in RB/E2F target gene deregulation and accelerated tumorigenic proliferation, thereby demonstrating that even in the context of a complex tumor cell genome, RB status exerts significant control over proliferation. Furthermore, the RB deficiency compromised the short-term cell-cycle inhibition following cisplatin, ionizing radiation, and antiestrogen therapy. In the context of DNA-damaging agents, this bypass resulted in increased sensitivity to these agents in cell culture and xenograft models. In contrast, the bypass of antiestrogen signaling resulted in continued proliferation and xenograft tumor growth in the presence of tamoxifen. These effects of aberrations in RB function were recapitulated by ectopic E2F expression, indicating that control of downstream target genes was an important determinant of the observed responses. Specific analyses of an RB gene expression signature in 60 human patients indicated that deregulation of this pathway was associated with early recurrence following tamoxifen monotherapy. Thus, because the RB pathway is a critical determinant of tumorigenic proliferation and differential therapeutic response, it may represent a critical basis for directing therapy in the treatment of breast cancer. 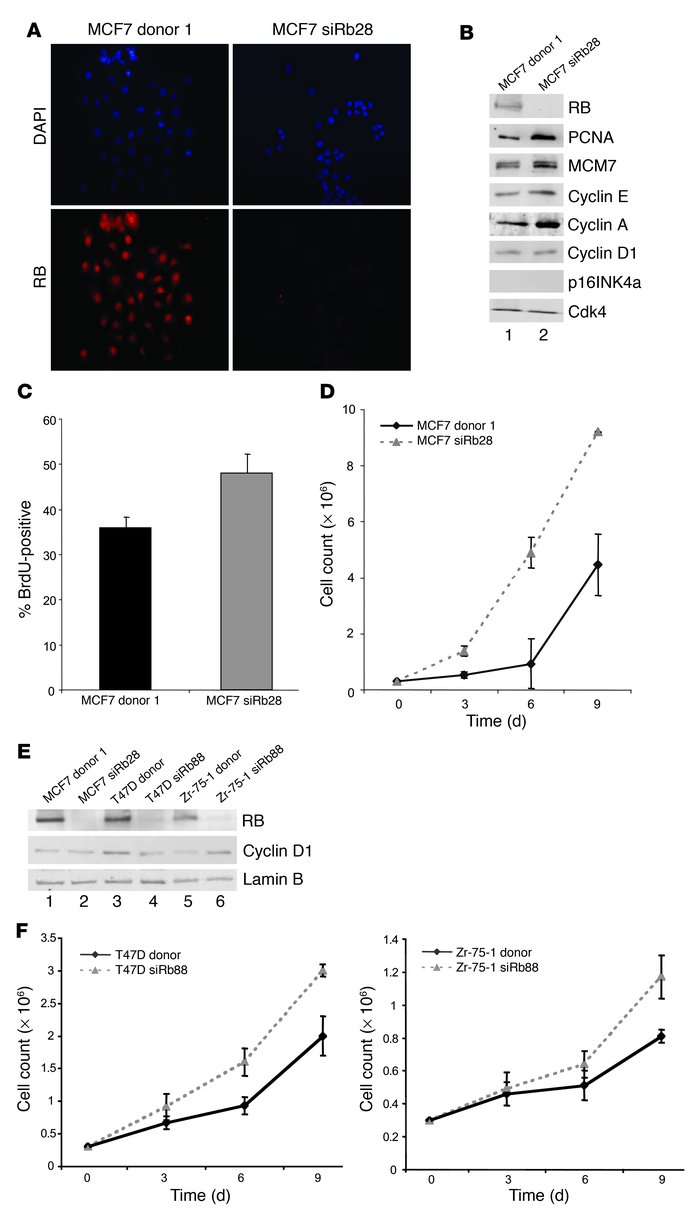 () MCF7 cells transfected with MSCV donor or MSCV siRb plasmids were selected with puromycin to isolate stable clones. Clones were screened by RB immunofluorescence as shown for MCF7 donor 1 and siRb28. Images were captured at equal exposures. Original magnification, ×20. () Lysates from MCF7 donor 1 and siRb28 clones were immunoblotted for expression levels of RB, PCNA, MCM7, cyclin E, cyclin A, cyclin D1, and p16INK4a. Cdk4 served as a loading control. () Cells represented in were BrdU labeled for 10 hours, and BrdU immunofluorescence was performed and scored. () Cells represented in were seeded at 3 × 105, cell growth assays were carried out for 9 days, and cells were counted every 3 days. () Lysates represented in along with lysates from polyclonal populations of T47D and Zr-75-1 cells infected with retrovirus encoding donor or siRb88 plasmids were immunoblotted for expression levels of RB and cyclin D1. Lamin B served as a loading control. () Retrovirally infected T47D and Zr-75-1 cells represented in were seeded at 3 × 105, and growth assays were carried out as described for .