The role of the renin-angiotensin system has been investigated by overexpression or inactivation of its different genes in animals. However, there is no data concerning the effect of the constitutive activation of any component of the system. A knockin mouse model has been constructed with a gain-of-function mutant of the Ang II receptor, type 1A (AT1A), associating a constitutively activating mutation (N111S) with a C-terminal deletion, which impairs receptor internalization and desensitization. In vivo consequences of this mutant receptor expression in homozygous mice recapitulate its in vitro characteristics: the pressor response is more sensitive to Ang II and longer lasting. These mice present with a moderate (~20 mmHg) and stable increase in BP. They also develop early and progressive renal fibrosis and cardiac fibrosis and diastolic dysfunction. However, there was no overt cardiac hypertrophy. The hormonal parameters (low-renin and inappropriately normal aldosterone productions) mimic those of low-renin human hypertension. This new model reveals that a constitutive activation of AT1A leads to cardiac and renal fibrosis in spite of a modest effect on BP and will be useful for investigating the role of Ang II in target organs in a model similar to some forms of human hypertension.

Targeted knockin of the gene by homologous recombination into ES cells and mouse. 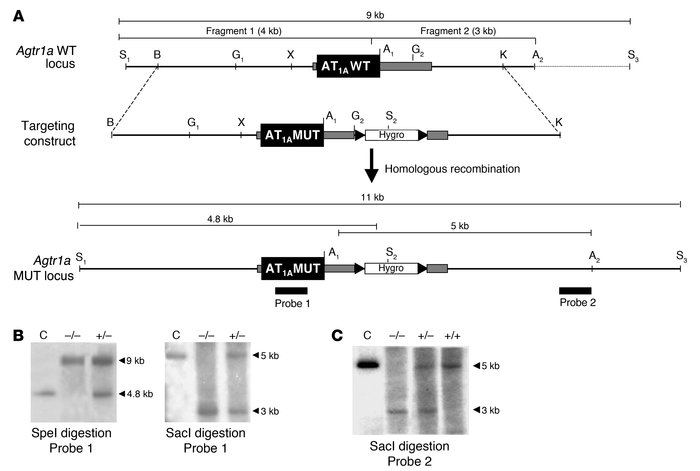