EGFR is frequently mutated and amplified in lung adenocarcinomas sensitive to EGFR inhibitors gefitinib and erlotinib. A secondary mutation, T790M, has been associated with acquired resistance but has not been shown to be sufficient to render EGFR mutant/amplified lung cancers resistant to EGFR inhibitors. We created a model for studying acquired resistance to gefitinib by prolonged exposure of a gefitinib-sensitive lung carcinoma cell line (H3255; EGFR mutated and amplified) to gefitinib in vitro. The resulting resistant cell line acquired a T790M mutation in a small fraction of the amplified alleles that was undetected by direct sequencing and identified only by a highly sensitive HPLC-based technique. In gefitinib-sensitive lung cancer cells with EGFR mutations and amplifications, exogenous introduction of EGFR T790M effectively conferred resistance to gefitinib and continued ErbB-3/PI3K/Akt signaling when in cis to an activating mutation. Moreover, continued activation of PI3K signaling by the PIK3CA oncogenic mutant, p110α E545K, was sufficient to abrogate gefitinib-induced apoptosis. These findings suggest that allelic dilution of biologically significant resistance mutations may go undetected by direct sequencing in cancers with amplified oncogenes and that restoration of PI3K activation via either a T790M mutation or other mechanisms can provide resistance to gefitinib.

Generation of a cell line, H3255 GR, with acquired resistance to gefitinib. 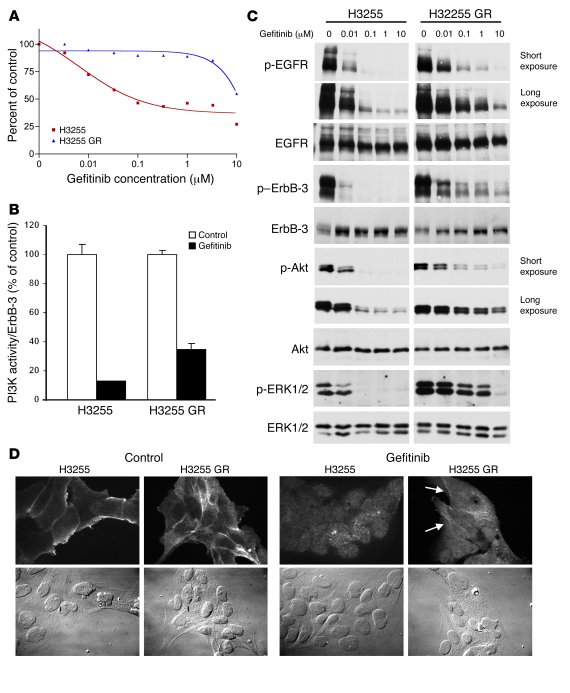