The stem cell niches in bone

The stem cell niches in bone

The stem cell niche is composed of a specialized population of cells that plays an essential role in regulating adult stem cell self-renewal and differentiation. In adults, osteoblasts, responsible for osteogenesis, and hematopoietic cells, responsible for hematopoiesis, are closely associated in the bone marrow, suggesting a reciprocal relationship between the two. It was recently discovered that a subset of osteoblasts functions as a key component of the HSC niche (namely, the osteoblastic niche), controlling HSC numbers. HSCs interact not only with osteoblasts but also with other stromal cells, including endothelial cells. Sinusoidal endothelial cells in bone marrow have been revealed as an alternative HSC niche called the vascular niche. In this Review we compare the architecture of these 2 HSC niches in bone marrow. We also highlight the function of osteoblasts in maintaining a quiescent HSC microenvironment and the likely role of the vascular niche in regulating stem cell proliferation, differentiation, and mobilization. In addition, we focus on studies of animal models and in vitro assays that have provided direct insights into the actions of these osteoblastic and vascular niches, revealing central roles for numerous signaling and adhesion molecules. Many of the discoveries described herein may contribute to future clinical treatments for hematopoietic and bone-related disorders, including cancer. 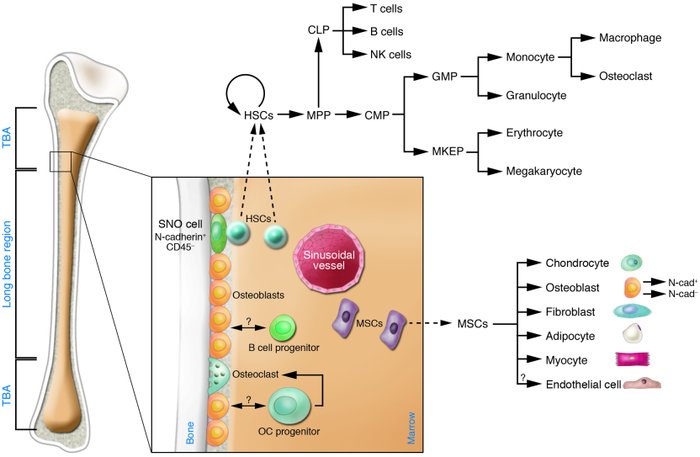