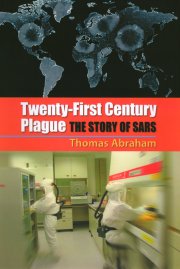 In the last 20 years, new and reemerging pathogens have appeared at alarming rates, garnering considerable attention from the scientific and public health communities and the media. Public health threats (e.g., West Nile virus, anthrax, SARS, and avian influenza) have increased concerns about our lack of preparedness to detect and respond to emerging infectious diseases domestically and internationally. The detection and characterization of a new disease caused by a previously unrecognized virus; its rapid global dissemination; and ultimately its control using traditional public health methods including isolation, quarantine, and contact tracing are the subject of Twenty-first century plague: the story of SARS by Thomas Abraham, an experienced journalist currently on the faculty of Hong Kong University.

The author indicates that the book is written for “a general audience,” but its topic is relevant for clinicians, researchers, public health officials, policy makers, and historians interested in infectious disease epidemics. The introductory chapter provides useful background information on recent emerging infections and emphasizes the important zoonotic link found for many of them. The subsequent chapters describe the origin of the SARS epidemic in southern China, the introduction and spread of the disease in Hong Kong, the global dissemination of the disease and the public health response undertaken, and efforts to identify the causative agent (a previously unrecognized coronavirus). The concluding chapter discusses the SARS experience and lessons learned in the context of the 1918-1919 influenza pandemic, the current H5N1 influenza situation, and potential new pandemic threats.

The author derived his information from published accounts in the scientific and lay media and from extensive interviews conducted primarily with persons in China and Hong Kong and at the World Health Organization (WHO). One of the book's most interesting aspects is the discussion of the early SARS outbreak in southern China: the lack of transparency on the part of Chinese government officials, the mistaken impression that the disease was caused by Chlamydia pneumoniae, the constraints placed on reporting the outbreak, and the timing in relation to a political leadership change in China.

The book clearly captures the efforts of Chinese physicians to manage SARS patients and to control disease spread, yet it also emphasizes how valuable this knowledge would have been to clinicians and public health officials in many other countries had it been shared promptly. The discussion of the situation in Hong Kong captures the dramatic events involving a “superspreader,” whose overnight stay at a hotel precipitated global spread of the disease. Abraham describes the outbreaks in the Amoy Gardens housing complex and an Air China flight and the stigma experienced by affected individuals. The rivalry between the Hong Kong University and the Chinese University of Hong Kong is discussed, along with the frustrations over lack of access to vital information on the virus and the incredible courage of and psychological stress on health care workers.

The book painfully describes the heroic efforts of the late Carlo Urbani, the WHO official in Vietnam who recognized early on the gravity of the situation and took aggressive action to control the disease in Hanoi, but not in time to prevent his own death. Other important aspects discussed include the outstanding leadership provided by the WHO in taking action by issuing the first Global Health Alert on March 12, 2003, and in rapidly developing international networks of clinicians, epidemiologists, and virologists to respond to the emergency. Among other notable achievements, this interdisciplinary collaborative approach resulted in the rapid identification and confirmation of the SARS etiologic agent by research teams in Hong Kong, Germany, and the United States. Finally, the description of the resourceful and determined efforts in assessing the role of civet cats and other exotic species in the wet animal markets in Guandong Province and urging implementation of control measures is fascinating reading.

The book has a few shortcomings, although they do not detract from its overall value. A more complete assessment of the roles of all partners in the response could have been obtained by interviewing a broader range of sources, especially in Canada, the only western country to have an appreciable outbreak of the virus. The narrative is not always chronological and therefore is somewhat hard to follow (the time line in the appendix is helpful in this regard), and the references to multiple Centers for Disease Control is sometimes confusing. Also, there is no discussion of the work in The Netherlands to fulfill Koch’s postulates regarding disease causation or the episodes of disease transmission within a laboratory in Taiwan, Singapore, and China.

The book provides an important summary of many aspects of the global experience with a new disease and discusses important lessons learned from the SARS response and their implications for dealing with the next global disease threat. A quotation from the final paragraph in the book is noteworthy in highlighting the critical importance of transparency and political will: “Governments have to recognize that a disease in any one part of the world is a threat to every other part of the world, and work together to fight common threats.”