ROS are a risk factor of several cardiovascular disorders and interfere with NO/soluble guanylyl cyclase/cyclic GMP (NO/sGC/cGMP) signaling through scavenging of NO and formation of the strong oxidant peroxynitrite. Increased oxidative stress affects the heme-containing NO receptor sGC by both decreasing its expression levels and impairing NO-induced activation, making vasodilator therapy with NO donors less effective. Here we show in vivo that oxidative stress and related vascular disease states, including human diabetes mellitus, led to an sGC that was indistinguishable from the in vitro oxidized/heme-free enzyme. This sGC variant represents what we believe to be a novel cGMP signaling entity that is unresponsive to NO and prone to degradation. Whereas high-affinity ligands for the unoccupied heme pocket of sGC such as zinc–protoporphyrin IX and the novel NO-independent sGC activator 4-[((4-carboxybutyl){2-[(4-phenethylbenzyl)oxy]phenethyl}amino) methyl [benzoic]acid (BAY 58-2667) stabilized the enzyme, only the latter activated the NO-insensitive sGC variant. Importantly, in isolated cells, in blood vessels, and in vivo, BAY 58-2667 was more effective and potentiated under pathophysiological and oxidative stress conditions. This therapeutic principle preferentially dilates diseased versus normal blood vessels and may have far-reaching implications for the currently investigated clinical use of BAY 58-2667 as a unique diagnostic tool and highly innovative vascular therapy.

Effects of BAY 58-2667 on sGC protein levels under normal and oxidative conditions. 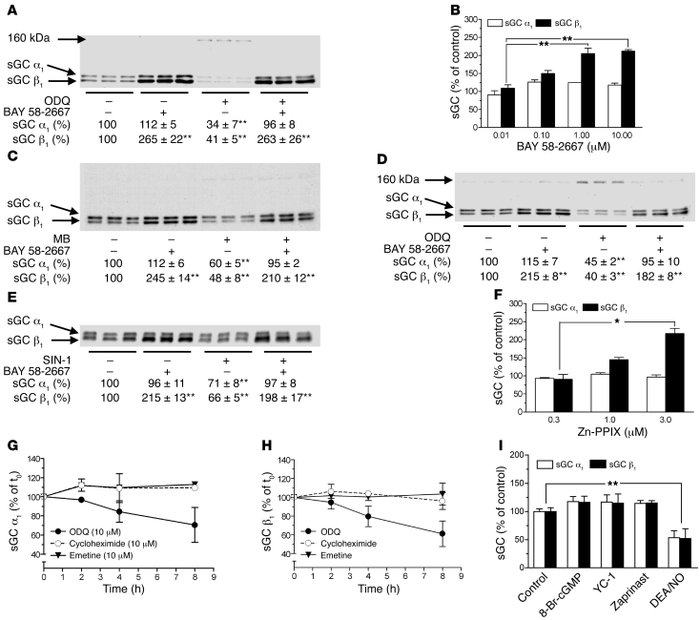