Airway DCs play a crucial role in the pathogenesis of allergic asthma, and interfering with their function could constitute a novel form of therapy. The sphingosine 1–phosphate receptor agonist FTY720 is an oral immunosuppressant that retains lymphocytes in lymph nodes and spleen, thus preventing lymphocyte migration to inflammatory sites. The accompanying lymphopenia could be a serious side effect that would preclude the use of FTY720 as an antiasthmatic drug. Here we show in a murine asthma model that local application of FTY720 via inhalation prior to or during ongoing allergen challenge suppresses Th2-dependent eosinophilic airway inflammation and bronchial hyperresponsiveness without causing lymphopenia and T cell retention in the lymph nodes. Effectiveness of local treatment was achieved by inhibition of the migration of lung DCs to the mediastinal lymph nodes, which in turn inhibited the formation of allergen-specific Th2 cells in lymph nodes. Also, FTY720-treated DCs were intrinsically less potent in activating naive and effector Th2 cells due to a reduced capacity to form stable interactions with T cells and thus to form an immunological synapse. These data support the concept that targeting the function of airway DCs with locally acting drugs is a powerful new strategy in the treatment of asthma.

Effect of local FTY720 administration on lung DC migration to the lung-draining LNs. 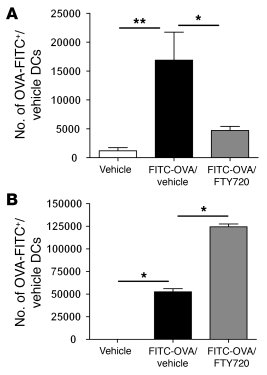 () On day 0, mice were instilled i.t. with 10 mg/ml FITC-OVA with or without 0.25 μg FTY720. Twenty-four hours later, the presence of FITC+ migrating DCs in thoracic draining LNs was analyzed by flow cytometry. () Effect of FTY720 on lung DCs. Twenty-four hours after installation of FITC-OVA+/vehicle, lungs were enzymatically digested and stained for the presence of FITC+MHCII+CD11c+ DCs. Experiments were repeated 3 times with similar results; = 4 mice per group. Data indicate mean ± SEM. * < 0.05; ** < 0.01.