Although inflammatory bowel disease (IBD) is the result of a dysregulated immune response to commensal gut bacteria in genetically predisposed individuals, the mechanism(s) by which bacteria lead to the development of IBD are unknown. Interestingly, deletion of intestinal goblet cells protects against intestinal injury, suggesting that this epithelial cell lineage may produce molecules that exacerbate IBD. We previously reported that resistin-like molecule β (RELMβ; also known as FIZZ2) is an intestinal goblet cell–specific protein that is induced upon bacterial colonization whereupon it is expressed in the ileum and colon, regions of the gut most often involved in IBD. Herein, we show that disruption of this gene reduces the severity of colitis in the dextran sodium sulfate (DSS) model of murine colonic injury. Although RELMβ does not alter colonic epithelial proliferation or barrier function, we show that recombinant protein activates macrophages to produce TNF-α both in vitro and in vivo. RELMβ expression is also strongly induced in the terminal ileum of the SAMP1/Fc model of IBD. These results suggest a model whereby the loss of epithelial barrier function by DSS results in the activation of the innate mucosal response by RELMβ located in the lumen, supporting the hypothesis that this protein is a link among goblet cells, commensal bacteria, and the pathogenesis of IBD.

Characterization of the RELMβ knockout. 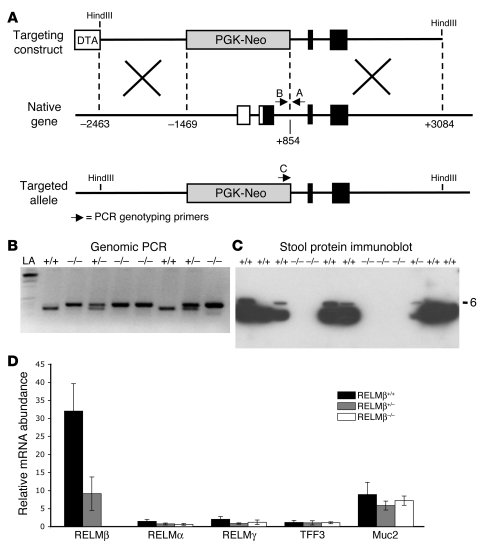 () Schematic diagram of the knockout strategy. The phosphoglycerate kinase–Neo (PGK-Neo) cassette was used to disrupt 2323 bp of the RELMβ gene locus, replacing the promoter region and the first 2 exons. () Genomic PCR using primers shown in . Amplification of a 295-bp product by primers A and B indicate the wild-type allele (lower band), whereas a 413-bp product amplified by primers A and C indicates the null allele (upper band). LA, ladder. () Immunoblot of RELMβ using protein isolated from the stool of wild-type and RELMβ-knockout mice. () Quantification of mRNA expression for RELM isoforms and goblet cell–specific genes using RNA isolated from the proximal colon of RELMβ+/+, RELMβ +/–, and RELMβ–/– mice ( = 3; mean ± SD).