Dichotomy of Ca2+ in the heart: contraction versus intracellular signaling

Dichotomy of Ca2+ in the heart: contraction versus intracellular signaling

Ca2+ plays a pivotal role in both excitation-contraction coupling (ECC) and activation of Ca2+-dependent signaling pathways. One of the remaining questions in cardiac biology is how Ca2+-dependent signaling pathways are regulated under conditions of continual Ca2+ transients that mediate cardiac contraction during each heartbeat. Ca2+-calmodulin–dependent protein kinase II (CaMKII) activation and its ability to regulate histone deacetylase 5 (HDAC5) nuclear shuttling represent a critical Ca2+-dependent signaling circuit for controlling cardiac hypertrophy and heart failure, yet the mechanism of activation by Ca2+ is not known. In this issue of the JCI, Wu et al. convincingly demonstrate that the inositol 1,4,5-trisphosphate receptor (InsP3R) is involved in local control of Ca2+ for activating CaMKII in the nuclear envelope of adult ventricular cardiac myocytes (see the related article beginning on page 675). The overall paradigm that is demonstrated is the best example of a molecular mechanism whereby signaling is directly regulated by a local Ca2+ pool that is disparate or geometrically insensitive to cytosolic Ca2+ underlying each contractile cycle.

Schematic of potential Ca2+ sources that might be specialized to regulate reactive signaling pathways in cardiac myocytes. 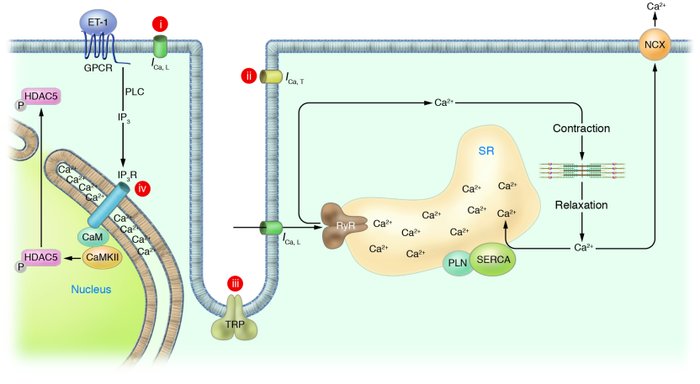