The transcription factor NF-κB is an important regulator of homeostatic growth and inflammation. Although gene-targeting studies have revealed important roles for NF-κB, they have been complicated by component redundancy and lethal phenotypes. To examine the role of NF-κB in endothelial tissues, Tie2 promoter/enhancer–IκBαS32A/S36A transgenic mice were generated. These mice grew normally but exhibited enhanced sensitivity to LPS-induced toxemia, notable for an increase in vascular permeability and apoptosis. Moreover, B16-BL6 tumors grew significantly more aggressively in transgenic mice, underscoring a new role for NF-κB in the homeostatic response to cancer. Tumor vasculature in transgenic mice was extensive and disorganized. This correlated with a marked loss in tight junction formation and suggests that NF-κB plays an important role in the maintenance of vascular integrity and response to stress. 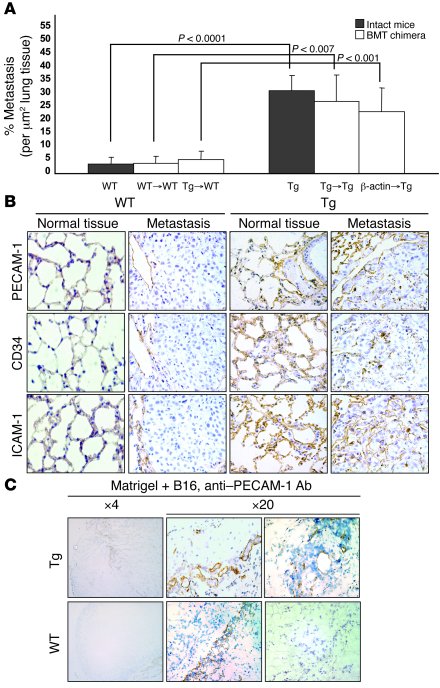 () WT and transgenic mice were engrafted with either transgenic or WT (from β-actin–GFP+ mice) BM. Quantification of tumor mass (percent metastasis per micrometer squared of lung tissue) demonstrated that mice with transgenic ECs (i.e., Tg, = 4; Tg→Tg, = 3; and β-actin→Tg, = 6) exhibited considerably higher tumor burdens (respectively, 31%, 27%, and 23% versus 3.6%, 3.9%, and 5.2%; < 0.0001, < 0.007, and < 0.001) than mice with WT ECs (i.e., WT, = 3; WT→WT, = 3; and Tg→WT, = 6). Five fields were evaluated per mouse. Data represent mice from transgenic lines 2 and 4. () A significant increase in tumor vascularization in mice with transgenic ECs was revealed by PECAM-1 (CD31), CD34, and ICAM-1 immunostaining visualized under a ×20 objective. () Neovascularization in B16-BL6 cell–impregnated Matrigel was significantly increased when transplanted into Tg mice. Blood vessels were revealed by staining for PECAM-1 and visualized under ×4 and ×20 objectives, as indicated.