Transfusion-related acute lung injury (TRALI) is the most common cause of transfusion-related mortality. To explore the pathogenesis of TRALI, we developed an in vivo mouse model based on the passive transfusion of an MHC class I (MHC I) mAb (H2Kd) to mice with the cognate antigen. Transfusion of the MHC I mAb to BALB/c mice produced acute lung injury with increased excess lung water, increased lung vascular and lung epithelial permeability to protein, and decreased alveolar fluid clearance. There was 50% mortality at a 2-hour time point after Ab administration. Pulmonary histology and immunohistochemistry revealed prominent neutrophil sequestration in the lung microvasculature that occurred concomitantly with acute peripheral blood neutropenia, all within 2 hours of administration of the mAb. Depletion of neutrophils by injection of anti-granulocyte mAb Gr-1 protected mice from lung injury following MHC I mAb challenge. FcRγ–/– mice were resistant to MHC I mAb–induced lung injury, while adoptive transfer of wild-type neutrophils into the FcRγ–/– animals restored lung injury following MHC I mAb challenge. In conclusion, in a clinically relevant in vivo mouse model of TRALI using an MHC I mAb, the mechanism of lung injury was dependent on neutrophils and their Fcγ receptors. 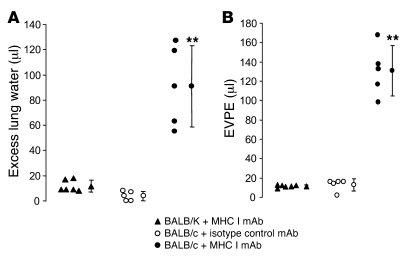 Gravimetric excess lung water () and EVPE determined from i.v. 125I-labeled albumin protein leakage () were increased in BALB/c mice (H2Kd) given MHC I mAb (4.5 mg/kg) but not in BALB/K controls or in BALB/c mice given an isotype-matched Ab (IgG2a, κ). Each data point represents a single animal. ** < 0.01 compared with BALB/K + MHC I mAb and BALB/c + isotype control mAb.