Safe induction of autoantigen-specific long-term tolerance is the “holy grail” for the treatment of autoimmune diseases. In animal models of type 1 diabetes, oral or i.n. immunization with islet antigens induces Tregs that are capable of bystander suppression. However, such interventions are only effective early in the prediabetic phase. Here, we demonstrate that a novel combination treatment with anti-CD3ε–specific antibody and i.n. proinsulin peptide can reverse recent-onset diabetes in 2 murine diabetes models with much higher efficacy than with monotherapy with anti-CD3 or antigen alone. In vivo, expansion of CD25+Foxp3+ and insulin-specific Tregs producing IL-10, TGF-β, and IL-4 was strongly enhanced. These cells could transfer dominant tolerance to immunocompetent recent-onset diabetic recipients and suppressed heterologous autoaggressive CD8 responses. Thus, combining a systemic immune modulator with antigen-specific Treg induction is more efficacious in reverting diabetes. Since Tregs act site-specifically, this strategy should also be expected to reduce the potential for systemic side effects.

Treatment with a combination of anti-CD3 and hpIIp increases the number of CD4+ T cells with a regulatory phenotype. 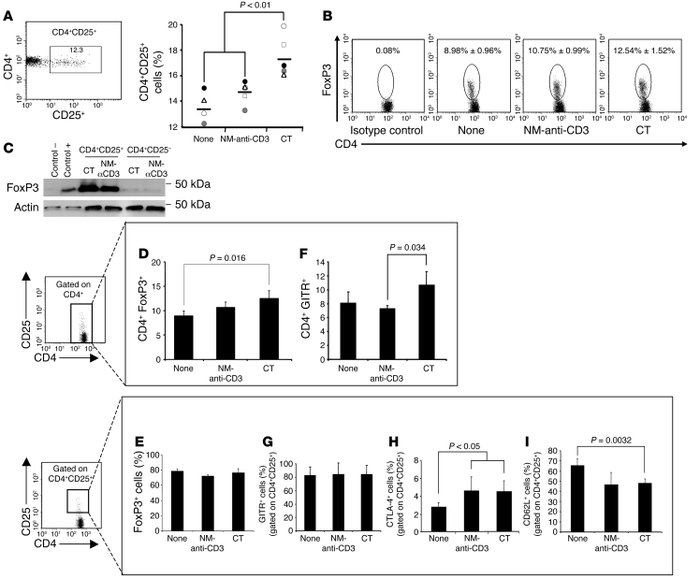 The data are from euglycemic animals treated with anti-CD3 ( = 5 experiments with 3–5 mice per experiment) or with the combination therapy ( = 5 experiments with 3–5 mice per experiment). As control, nontreated animals were used ( = 4 experiments with 4–6 mice per experiment). () The percentage of CD4+CD25+ cells is shown. () After intracellular staining, the percentage of CD4+Foxp3+ cells was evaluated. For each group, the mean ± SD is given, with = 0.016 for the combination treatment group and = 0.089 for the NM anti-CD3–treated group as compared with the untreated control group (None). () CD4+CD25+ cells expressed high levels of Foxp3. For each sample, cells were lysed in loading buffer containing SDS and β-mercaptoethanol and used in the Western blotting experiment. 5 × 105 purified CD4+CD25+ and CD4+CD25– cells were obtained from mice protected by treatment with anti-CD3 (α-CD3) alone or in combination with the hpIIp. As positive and negative controls (control+ and control–, respectively), 105 HeLa cells stably expressing or not, respectively, the mouse Foxp3 protein were loaded. Actin was used to evaluate the amount of loaded proteins. (–) Long-term protected RIP-LCMV mice were sacrificed and the percentage of Treg markers in pooled splenocytes and PLNs cells determined. The percentages of GITR+ and Foxp3+ cells was measured in the CD4+ population ( and ). The percentage of GITR+, Foxp3+, CTLA-4+, and CD62L+ cells were measured in the CD4+CD25+ population (F–I).