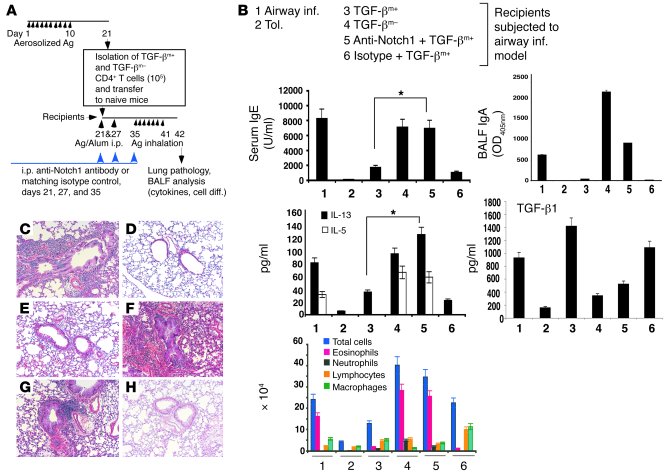 () Experimental setup. Anti-Notch1 antibody (50 μg/mouse) or matching isotype control was administrated i.p. into recipient animals 1 hour before OVA/alum injection (days 21 and 27) or aerosol challenge (day 35). Control mice were immunized with OVA/alum (airway inflammation) or subjected to the tolerance protocol and challenged with aerosolized OVA. Twenty-four hours after the last OVA challenge, mice were processed for different endpoints. () Shown are analysis of IgE in sera and IgA, and cytokine levels (IL-5, IL-13, IL-10 [undetectable] and TGF-β1) and cell differentials in BALF obtained from 6 groups of animals. Total TGF-β1 levels were measured after acid treatment of BALF. Active TGF-β1, measured in the absence of acid treatment, was detected at approximately 100 pg/ml only in the BALF of mice that received TGF-βm+ cells (lanes 3 and 6). * < 0.05, TGF-βm+ recipients that also received anti-Notch1 antibody versus mice that received TGF-βm+ cells alone. (–) Tissue histology is also shown. Lung infiltrates were of +5 grade in all TGF-βm– cell transfers () or in control OVA/OVA–immunized mice (), between +4 and +5 in mice that received TGF-βm+ cells and anti-Notch1 antibody treatment (), compared with grades between +1 and +2 in mice that received TGF-βm+ cells alone () or isotype control (), or in tolerized mice (). There were 3 mice per group, and the results are representative of 2 independent experiments. Ag, antigen. Magnification, ×40.