Reversal of suppression by TGF-βm+ cells by inhibition of Notch1 signaling. 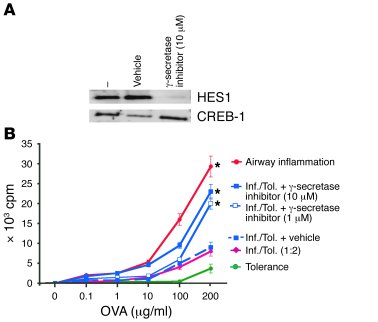 () The γ-secretase inhibitor L-685,458 inhibits Notch1-induced HES1 activation in stimulated CD4+ T cells. Naive CD4+ T cells were stimulated with soluble anti-CD3 (2 μg/ml) plus APCs for 16 hours in the presence or absence of L-685,458 or 0.1% DMSO (vehicle). Nuclear extracts were prepared, and presence of HES1 was determined by immunoblotting. CREB-1 expression was assessed as a control for protein loading. () The γ-secretase inhibitor reverses the suppressive functions of TGF-βm+ cells. Mice were first exposed to PBS (inflammation group; Inf.) or 1% OVA (tolerance group; Tol.) daily for 10 days and were then immunized with OVA/alum on days 21 and 27. Splenic CD4+ T cells isolated on day 34 were stimulated in vitro with different concentrations of OVA (1–200 μg/ml) and mitomycin C–treated, T cell–depleted APCs at equivalent cell numbers (105 cells each per well). In mixed cultures containing CD4+ T cells from both groups, twice the number of cells from the tolerance group was added. The γ-secretase inhibitor L-685,458 was added at a concentration of 1 or 10 μM. After 72 hours of incubation, cells were pulsed with [3H]thymidine to assess cell proliferation. The proliferative response of CD4+ T cells from naive mice is shown as a negative control. * < 0.05, mixed cultures with inhibitor treatment versus cultures without treatment. Each data point represents the mean ± SEM of triplicate wells. Shown is a representative experiment of 3.