Membrane-bound TGF-β, but not soluble TGF-β, activates the Notch1 pathway in target cells. 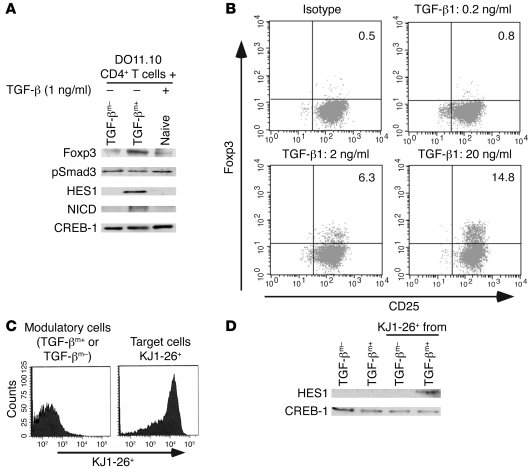 TGF-βm+ or TGF-βm– CD4+ T cells were mixed with DO11.10 TCR transgenic CD4+ T cells in a 1:1 ratio and stimulated with OVA (whole protein)/APCs for 1 day. () Expression of Foxp3, pSmad3, HES1, and NICD was assessed in nuclear fractions of the cells by Western blot analysis using specific antibodies. CREB-1 expression is shown as a marker for protein loading. Densitometric reading of protein expression revealed pSmad3/CREB-1 ratios of 0.6, 0.4, and 0.7 and Foxp3/CREB-1 ratios of 0.05, 0.4, and 0.1 for TGF-βm–, TGF-βm+, and soluble TGF-β incubations with DO.11 T cells, respectively. () Induction of Foxp3 expression in CD4+CD25– T cells treated with different doses of soluble TGF-β for 72 hours in the presence of soluble anti-CD3 (2 μg/ml) and T cell–depleted splenocytes. Foxp3 was detected by intracellular staining techniques. Numbers in the dot plots denote percentages. () In separate experiments, after 3 days of coculture, the target KJ1-26+ DO11.10 TCR transgenic T cells were sorted from the modulatory KJ1-26– TGF-βm+ or TGF-βm– cells, and nuclear extracts were prepared from each fraction. () Analysis of HES1 expression by immunoblotting of nuclear extracts of KJ1-26– and KJ1-26+ FACS-sorted cells.