Claudin-16 (Cldn16) is selectively expressed at tight junctions (TJs) of renal epithelial cells of the thick ascending limb of Henle’s loop, where it plays a central role in the reabsorption of divalent cations. Over 20 different mutations in the CLDN16 gene have been identified in patients with familial hypomagnesemia with hypercalciuria and nephrocalcinosis (FHHNC), a disease of excessive renal Mg2+ and Ca2+ excretion. Here we show that disease-causing mutations can lead to the intracellular retention of Cldn16 or affect its capacity to facilitate paracellular Mg2+ transport. Nine of the 21 Cldn16 mutants we characterized were retained in the endoplasmic reticulum, where they underwent proteasomal degradation. Three mutants accumulated in the Golgi complex. Two mutants were efficiently delivered to lysosomes, one via clathrin-mediated endocytosis following transport to the cell surface and the other without appearing on the plasma membrane. The remaining 7 mutants localized to TJs, and 4 were found to be defective in paracellular Mg2+ transport. We demonstrate that pharmacological chaperones rescued surface expression of several retained Cldn16 mutants. We conclude that FHHNC can result from mutations in Cldn16 that affect intracellular trafficking or paracellular Mg2+ permeability. Knowledge of the molecular defects associated with disease-causing Cldn16 mutations may open new venues for therapeutic intervention.

Predicted topology of Cldn16 and location of the different mutations linked to FHHNC reported. 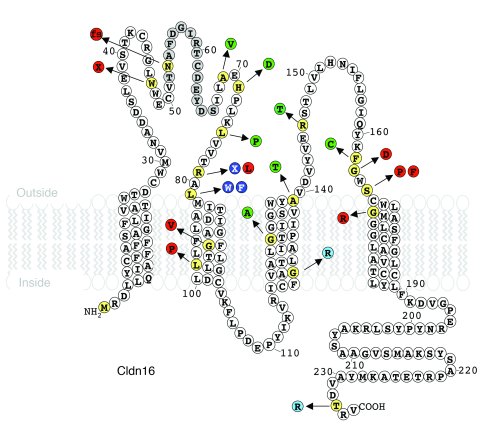 Shown is the amino acid sequence in 1-letter code, with mutated residues in yellow and arrows indicating the change introduced by the mutation. The effect of the corresponding mutation on the predominant steady-state distribution of Cldn16 is highlighted in different colors: green, cell surface; red, ER; dark blue, Golgi complex; light blue, lysosomes. X, stop codon, fs, frame shift. The peptide (T52-S66) used to generate the anti-loop antibody is shaded in gray.