VEGF-A promotes angiogenesis in many tissues. Here we report that choroidal neovascularization (CNV) incited by injury was increased by excess VEGF-A before injury but was suppressed by VEGF-A after injury. This unorthodox antiangiogenic effect was mediated via VEGFR-1 activation and VEGFR-2 deactivation, the latter via Src homology domain 2–containing (SH2-containing) tyrosine phosphatase-1 (SHP-1). The VEGFR-1–specific ligand placental growth factor-1 (PlGF-1), but not VEGF-E, which selectively binds VEGFR-2, mimicked these responses. Excess VEGF-A increased CNV before injury because VEGFR-1 activation was silenced by secreted protein, acidic and rich in cysteine (SPARC). The transient decline of SPARC after injury revealed a temporal window in which VEGF-A signaling was routed principally through VEGFR-1. These observations indicate that therapeutic design of VEGF-A inhibition should include consideration of the level and activity of SPARC. 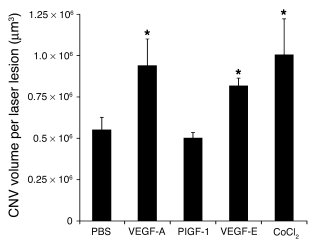