You are right too!

You are right too!

Macrophage scavenger receptors, such as CD36 and class A scavenger receptor (SR-A), have previously been thought to play a central role in foam cell formation and atherogenesis by mediating the uptake of oxidized LDL. In this issue of the JCI, Moore et al. report that Apoe–/– mice deficient in either CD36 or SR-A did not have less atherosclerosis at the level of the aortic valve than did wild-type Apoe–/– mice. In contrast, similar studies by previous investigators found that deletion of these receptors decreased atherogenesis. The reasons for the different results are not known, but these data suggest that the role of these receptors in atherogenesis remains unresolved. 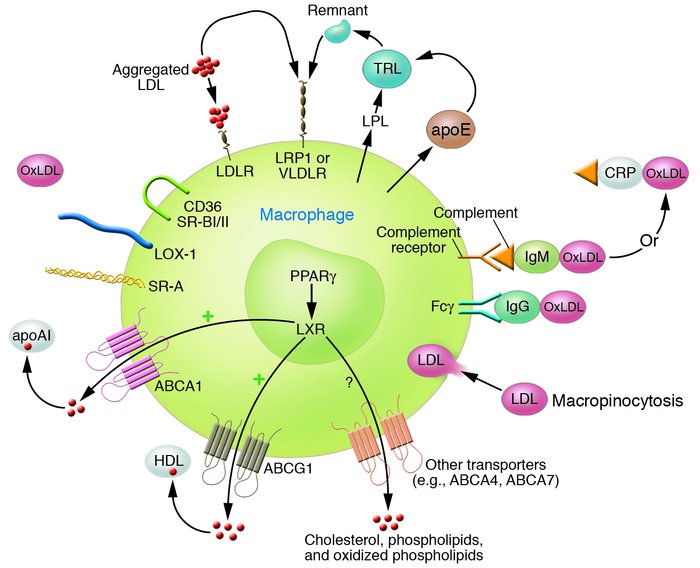 Theoretical mechanisms by which macrophage foam cells could be generated. Excess cholesteryl ester accumulation could occur because of the following: (a) enhanced uptake of native or modified lipoproteins or lipids; (b) alterations in intracellular cholesterol metabolism; (c) failure of export systems to maintain cholesterol homeostasis; or (d) combinations of the aforementioned mechanisms. Scavenger receptors expressed on the surface of macrophages that may contribute to the uptake of modified lipoproteins include SR-A, CD36, SR-BI, PSOX, MARCO, and lectin-like OxLDL receptor 1 (LOX-1). LDLR and LDLR-related protein 1 (LRP1) can mediate uptake of aggregated LDLs (including native or enzymatically modified LDLs), and secreted apoE can bind to such complexes and facilitate uptake, particularly via LRP1. LDL/IgG complexes can be internalized via Fc receptors, and lipoproteins bound by IgM or C-reactive protein (CRP) can in turn bind complement and undergo enhanced binding via complement receptors. Secreted lipoprotein lipase (LPL) can hydrolyze triglyceride-rich lipoproteins (TRLs), generating FFAs that can enter the cell and stimulate cholesteryl esterification. Residual remnant lipoproteins can be taken up via LRP1 or even LDLR or VLDLR. ABC transport proteins ABCA1 and ABCG1 and probably others, such as ABCA4, ABCA7, and SR-BI/II, can mediate the export of cholesterol, phospholipids, and/or oxidized phospholipids to apoAI, HDL, or other acceptors. Transcription of these transporters is regulated by PPARγ and liver X receptor (LXR), and they are also subject to posttranscriptional regulation by apoAI. Finally, uptake of native, modified or aggregated LDL could occur via stimulated macropinocytosis, independent of or in association with receptor-mediated uptake. Undoubtedly, many other factors influence net cholesterol accumulation.