Bile acids are natural detergents that assist in the absorption and digestion of fats in the intestine. In liver, the synthesis of bile acids from cholesterol is regulated by multiple signaling cascades that repress transcription of the gene encoding cholesterol 7α-hydroxylase (CYP7A1), the rate-limiting enzyme in the classic bile acid synthesis pathway. In this issue of the JCI, Ito and coworkers demonstrate that mice lacking βKlotho, a membrane protein with 2 putative glycosidase domains, have increased Cyp7a1 mRNA levels and bile acid concentrations. βKlotho-KO mice also have small gallbladders and are resistant to cholesterol gallstone formation. These findings highlight the central role of βKlotho in bile acid homeostasis and raise the possibility that this protein could be a pharmacologic target for the treatment of gallstones. 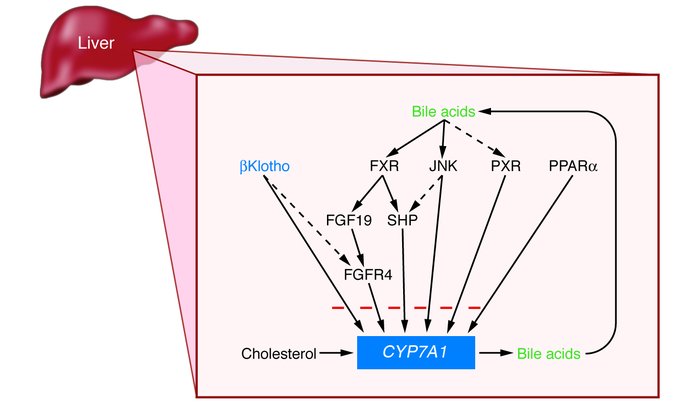 Shown are signaling pathways that repress transcription of the gene encoding CYP7A1, the rate-limiting enzyme in bile acid synthesis. Established pathways for the repression of in mice are indicated by solid lines. These include JNK and the nuclear bile acid receptor FXR. Activation of FXR represses by induction of the orphan nuclear receptor SHP and FGF19, which acts through FGFR4. Activation of the nuclear receptors pregnane X receptor (PXR) and PPARα by xenobiotics and fatty acids, respectively, also represses through unknown mechanisms. Speculative pathways are shown as dotted lines. In this issue, Ito and colleagues show that mice lacking βKlotho have increased expression and bile acid synthesis and are resistant to the formation of gallstones (). The similar phenotypes of βKlotho-KO and FGFR4-KO mice (), including increased bile acid synthesis and small gallbladders, suggest that these proteins may act through a common pathway.