Tbx18 regulates the development of the ureteral mesenchyme

Tbx18 regulates the development of the ureteral mesenchyme

Congenital malformations of the urinary tract are a major cause of renal failure in children and young adults. They are often caused by physical obstruction or by functional impairment of the peristaltic machinery of the ureter. The underlying molecular and cellular defects are, however, poorly understood. Here we present the phenotypic characterization of a new mouse model for congenital ureter malformation that revealed the molecular pathway important for the formation of the functional mesenchymal coating of the ureter. The gene encoding the T-box transcription factor Tbx18 was expressed in undifferentiated mesenchymal cells surrounding the distal ureter stalk. In Tbx18–/– mice, prospective ureteral mesenchymal cells largely dislocalized to the surface of the kidneys. The remaining ureteral mesenchymal cells showed reduced proliferation and failed to differentiate into smooth muscles, but instead became fibrous and ligamentous tissue. Absence of ureteral smooth muscles resulted in a short hydroureter and hydronephrosis at birth. Our analysis also showed that the ureteral mesenchyme derives from a distinct cell population that is separated early in kidney development from that of other mesenchymal cells of the renal system. 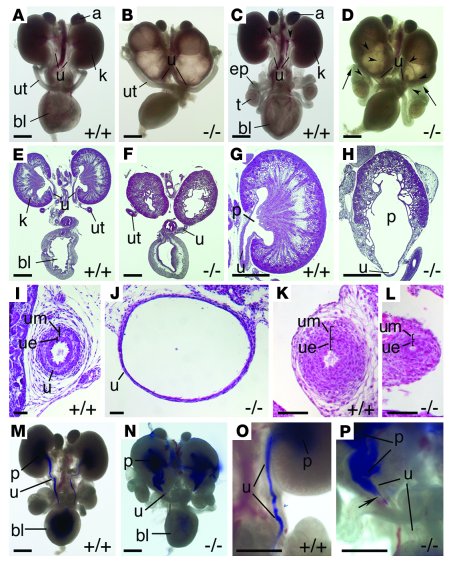 Kidney and urogenital tract anomalies in embryos at E18.5. (–) Morphology of whole urogenital systems of female ( and ) and male embryos ( and ). Arrowheads in and indicate blood vesels. Arrows in indicate ligaments connecting the testes to the kidneys. (–) Hematoxylin and eosin stainings of sagittal sections of whole urogenital systems ( and ) and kidneys ( and ) and of transverse sections of the ureter (–). ( and ) The ureter epithelium and its surrounding mesenchyme were multilayered in the wild-type embryo at the kidney level () and more distally (). ( and ) In the ureter, a single-layered epithelium was surrounded by a thin layer of mesenchymal cells at proximal () and distal () levels. (–) Physical obstruction of the ureter as revealed by ink injection experiments. ( and ) Higher-magnification views of the ureteropelvic region shown in and . Arrow in indicates obstruction in the ureter. a, adrenal; bl, bladder; ep, epididymis; k, kidney; p, pelvis; t, testis; u, ureter; ue, ureteric epithelium; um, ureteral mesenchyme; ut, uterus. Scale bars: 1,000 μm (– and –), 100 μm (–).