Individuals with X-linked lymphoproliferative disease (XLP) display defects in B cell differentiation in vivo. Specifically, XLP patients do not generate a normal number of CD27+ memory B cells, and those few that are present are IgM+. Recent studies have suggested that IgM+CD27+ B cells are not true memory cells, but rather B cells that guard against T cell–independent pathogens. Here we show that human XLP IgM+CD27+ B cells resemble normal memory B cells both morphologically and phenotypically. Additionally, IgM+CD27+ B cells exhibited functional characteristics of normal memory B cells, including the ability to secrete more Ig than naive B cells in response to both T cell–dependent and –independent stimuli. Analysis of spleens from XLP patients revealed a paucity of germinal centers (GCs), and the rare GCs detected were poorly formed. Despite this, Ig variable region genes expressed by XLP IgM+CD27+ B cells had undergone somatic hypermutation to an extent comparable to that of normal memory B cells. These findings reveal a differential requirement for the generation of IgM+ and Ig isotype–switched memory B cells, with the latter only being generated by fully formed GCs. Production of affinity-matured IgM by IgM+CD27+ B cells may protect against pathogens to which a normal immune response is elicited in XLP patients. 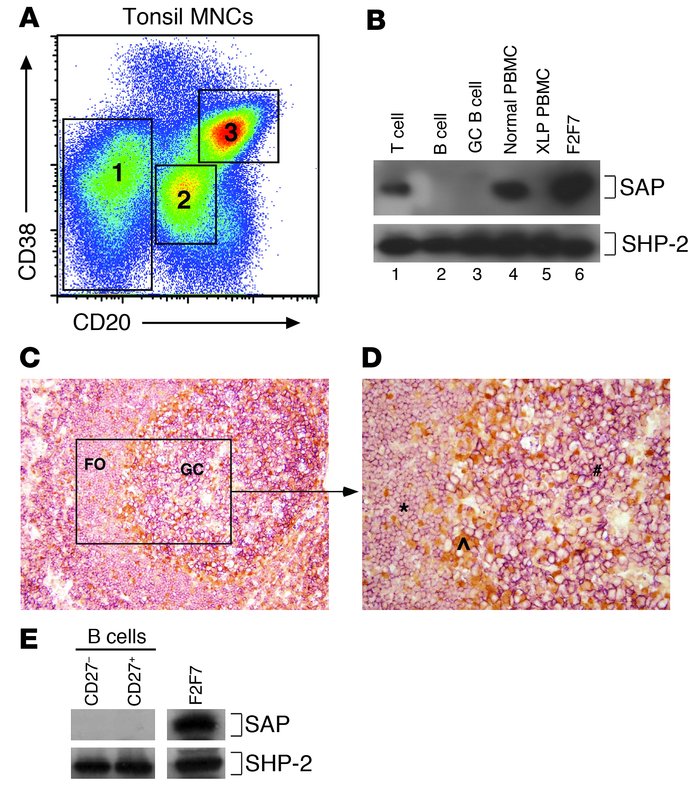 SAP is expressed in human T cells but not B cells. () Human tonsil mononuclear cells were stained with CD20 and CD38 mAbs. T cell (CD20–CD38+; population 1), B cell (CD20+CD38+; population 2), and GC B cell (CD20hiCD38hi; population 3) populations were isolated by cell sorting. Following sorting, the purity of populations 1, 2, and 3 was 98%, 98% and 95%, respectively. () Sort-purified tonsillar T cells, B cells, and GC B cells as well as activated PBMCs from a normal donor or an XLP patient (XLP#10; ref. ) were solubilized in 1% NP-40 lysis buffer in 10 mM Tris-HCl and 150 mM NaCl (pH 7.8) supplemented with protease and phosphatase inhibitors. Lysates containing ∼5–10 × 105 cell equivalents were analyzed for SAP expression by SDS-PAGE and Western blotting using rabbit anti-human SAP polyclonal antiserum (top). Lysates from the human T cell line F2F7 were examined concomitantly, and detection of SHP-2 expression was used to demonstrate equivalent loading of cellular proteins (bottom). Results are representative of data obtained by analyzing sort-purified B cell populations isolated from 3 different donor tonsils. ( and ) Immunohistology was performed on reactive tonsil sections using anti-CD20 mAb (pink/purple) and anti-SAP polyclonal Ab (orange/brown). B cells in the follicle (FO) (CD20+; asterisk) and GC (CD20hi; pound symbol), as well as SAP-expressing non–B cells (caret), are indicated. Boxed region in (magnification, ×20) is shown in (magnification, ×40). () Sort-purified PB naive and memory B cells were prepared and analyzed for SAP expression as described in .