Thousands die each year from sudden infant death syndrome (SIDS). Neither the cause nor basis for varied prevalence in different populations is understood. While 2 cases have been associated with mutations in type Vα, cardiac voltage-gated sodium channels (SCN5A), the “Back to Sleep” campaign has decreased SIDS prevalence, consistent with a role for environmental influences in disease pathogenesis. Here we studied SCN5A in African Americans. Three of 133 SIDS cases were homozygous for the variant S1103Y. Among controls, 120 of 1,056 were carriers of the heterozygous genotype, which was previously associated with increased risk for arrhythmia in adults. This suggests that infants with 2 copies of S1103Y have a 24-fold increased risk for SIDS. Variant Y1103 channels were found to operate normally under baseline conditions in vitro. As risk factors for SIDS include apnea and respiratory acidosis, Y1103 and wild-type channels were subjected to lowered intracellular pH. Only Y1103 channels gained abnormal function, demonstrating late reopenings suppressible by the drug mexiletine. The variant appeared to confer susceptibility to acidosis-induced arrhythmia, a gene-environment interaction. Overall, homozygous and rare heterozygous SCN5A missense variants were found in approximately 5% of cases. If our findings are replicated, prospective genetic testing of SIDS cases and screening with counseling for at-risk families warrant consideration. 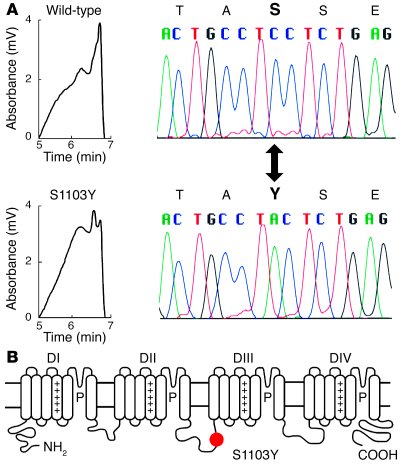 A polymorphism in encodes a variant cardiac sodium channel. () Denaturing HPLC waveform and direct sequencing of wild-type and S1103Y variant. The chromatogram shows the additional peak resulting from heteroduplex assembly of S1103 and Y1103 amplicons. Forward sequence of homozygous S1103 and Y1103 SIDS cases shows the C3308A change that leads to the substitution of serine (S) by tyrosine (Y). () Topology of the cardiac sodium channel encoded by shows the cytoplasmic location of the S1103Y missense change (red), the 4 homologous membrane domains (DI–DIV), the pore-forming (P) loops, and the voltage-sensing segments (+).