We previously identified a rearrangement of mixed-lineage leukemia (MLL) gene (also known as ALL-1, HRX, and HTRX1), consisting of an in-frame partial tandem duplication (PTD) of exons 5 through 11 in the absence of a partner gene, occurring in approximately 4%–7% of patients with acute myeloid leukemia (AML) and normal cytogenetics, and associated with a poor prognosis. The mechanism by which the MLL PTD contributes to aberrant hematopoiesis and/or leukemia is unknown. To examine this, we generated a mouse knockin model in which exons 5 through 11 of the murine Mll gene were targeted to intron 4 of the endogenous Mll locus. MllPTD/WT mice exhibit an alteration in the boundaries of normal homeobox (Hox) gene expression during embryogenesis, resulting in axial skeletal defects and increased numbers of hematopoietic progenitor cells. MllPTD/WT mice overexpress Hoxa7, Hoxa9, and Hoxa10 in spleen, BM, and blood. An increase in histone H3/H4 acetylation and histone H3 lysine 4 (Lys4) methylation within the Hoxa7 and Hoxa9 promoters provides an epigenetic mechanism by which this overexpression occurs in vivo and an etiologic role for MLL PTD gain of function in the genesis of AML. 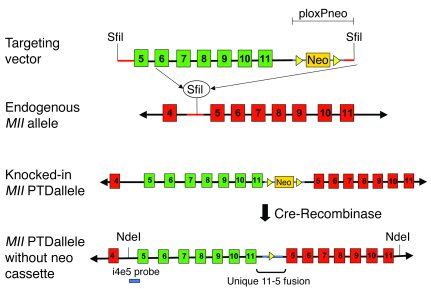 The backbone of the targeting vector is ploxPneo1 and contains a genomic clone spanning intron 4 through intron 11. Linearization of the vector at a unique SfiI site within intron 4 allows for recombination at the germline intron 4 of . A plasmid vector expressing Cre recombinase from a CMV promoter (pCre) was used to excise the neo cassette.