Muscle channelopathies and critical points in functional and genetic studies

Muscle channelopathies and critical points in functional and genetic studies

Muscle channelopathies are caused by mutations in ion channel genes, by antibodies directed against ion channel proteins, or by changes of cell homeostasis leading to aberrant splicing of ion channel RNA or to disturbances of modification and localization of channel proteins. As ion channels constitute one of the only protein families that allow functional examination on the molecular level, expression studies of putative mutations have become standard in confirming that the mutations cause disease. Functional changes may not necessarily prove disease causality of a putative mutation but could be brought about by a polymorphism instead. These problems are addressed, and a more critical evaluation of the underlying genetic data is proposed. 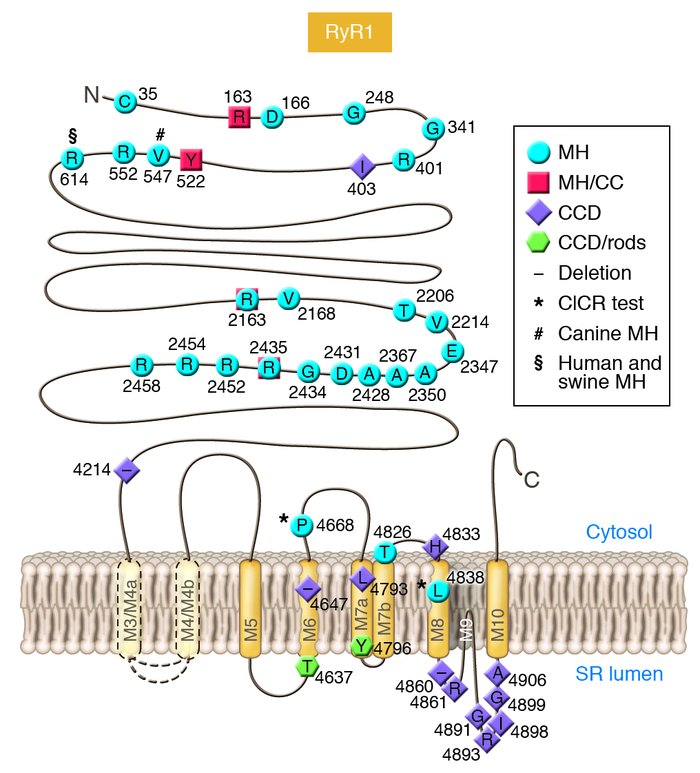 Skeletal muscle RyR1. RyR1 forms a homotetrameric protein complex that is situated in the SR membrane and functions as a Ca2+ release channel. The cytosolic part, the “foot,” bridges the gap between the transverse tubular system and the SR. It contains binding sites for various activating ligands, like Ca2+ (μM), ATP (nM), calmodulin (nM), caffeine (mM), and ryanodine (nM), and inactivating ligands, like dantrolene (>10 μM), Ca2+ (>10 μM), ryanodine (>100 μM), and Mg2+ (μM). The transmembrane segments, M3–M10, are numbered according to both the earlier model of Zorzato et al. () and the recently modified model of MacLennan and colleagues (). The first 2 cylinders, with dashed lines, indicate the tentative nature of the composition of the first predicted helical hairpin loop (M3–M4 or M4a–M4b). The long M7 sequence is designated as M7a and M7b. The proposed selectivity filter between M8 and M10 is designated as M9 even though it is clearly not a transmembrane sequence. Mutations causing susceptibility to MH and/or central core disease are indicated. Susceptibility to MH was defined by use of the in vitro contracture test or, in a single case, by the Japanese Ca-induced Ca release test (CICR test). MH/CC, MH with some central cores; CCD, central core disease; CCD/rods, CCD with nemaline rods.